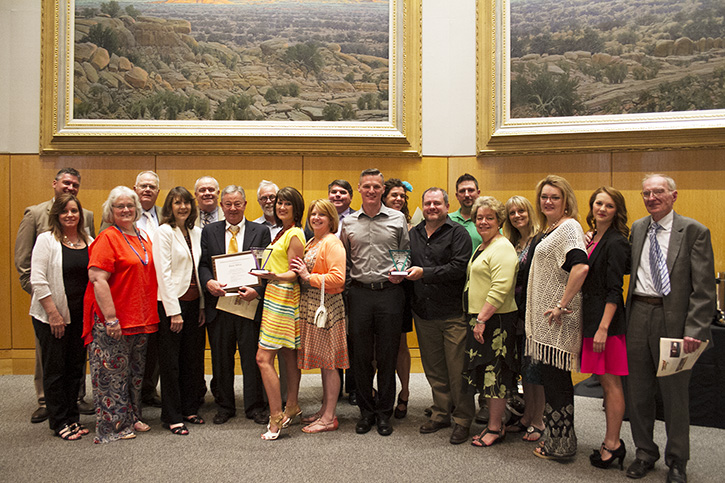 There was no denying that Okmulgee brought the biggest contingent to the Oklahoma Main Street Awards Banquet, an event that honors Main Street organizations from cities and towns across the state.

Every time the town was mentioned, the group of about 35 people representing Okmulgee Main Street and OSU Institute of Technology would clap and cheer louder than any other group in attendance. And “Okmulgee” was said a lot.

The awards banquet was held May 5 in Oklahoma City at the National Cowboy & Western Heritage Museum. The Main Street program, a part of the Oklahoma Department of Commerce, works to bring economic development while also taking part in historic preservation of the downtown districts in cities big and small.

Okmulgee Main Street was a top three finalist is all five categories it submitted nominations in and took the top prize in two of those categories— Outstanding Image Promotion for the #OkmulgeeRising campaign and Ike’s Downtown Pub & Eatery was recognized as the Downtown Business of the Year.

Okmulgee Rising is a revitalization movement that started nearly a year ago when consultant Ron Drake came to Okmulgee to assess the potential of the town’s historic downtown buildings to be renovated and repurposed.

Rusty Milroy, Okmulgee Main Street president, was also recognized as one of the Board Members of the Year and named to the Oklahoma Main Street Advisory Board.

Heather Sumner, Okmulgee Main Street director, said this year’s awards ceremony was a far cry from last year when she attended just a few weeks after being hired.

“Going from a small table to having to take a bus to get everyone here, going from never hearing Okmulgee mentioned to having four tables that were whooping and hollering all night, I was really excited,” Sumner said. “Being in the top three in all five categories we submitted nominations for is a real honor.”

But there was one entry that Sumner said may have meant a little more than the others, and luckily she took home the award for it.

“The one that brought it all together was #OkmulgeeRising. It encompasses everything and everybody— established businesses, new businesses, residential businesses, OSUIT, the Muscogee (Creek) Nation, economic development— really the community as a whole.”

OSUIT has been a large and vocal partner in the #OkmulgeeRising campaign, purchasing two downtown properties that will be renovated for student housing. The commitment from OSUIT has spurred other residents and organizations to invest in Okmulgee’s downtown.

“The collaboration over the past year between Main Street and OSUIT has made for a much more united community working toward common goals that have the potential for far reaching benefits for our students and the greater Okmulgee community,” said Anita Gordy-Watkins, executive vice president of OSUIT.

Being a part of the very vocal and supportive contingent at the awards banquet brought a sense of renewed pride of the Okmulgee community, Gordy-Watkins said, and it showcased to the rest of the Main Street communities the obvious momentum building within Okmulgee.

“Heather Sumner is to be commended for her efforts to mobilize the community in just a year’s time, she said. “She has put together an incredible Main Street Board that are working diligently to involve an overall effort to rebuild this community.”

Sumner said the awards banquet also serves as motivation and sparks ideas for how to continue to grow and improve Okmulgee Main Street.

“I was thinking ‘Next year we can do and this, and nominate this and this,’” she said. “They’re going to continue to hear Okmulgee’s name called for years.”