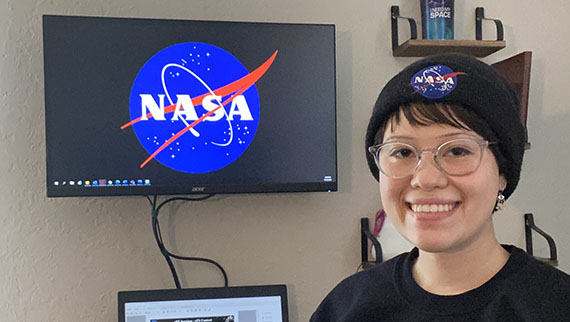 Adams, from Oklahoma City, graduated from OSUIT in the summer of 2020 with a Bachelor of Technology in Information Technologies – Software Development and Cybersecurity & Digital Forensics. After completing three paid internships with NASA, she was offered a full-time position upon graduation.

She said that her education at OSUIT aided in the success she had with NASA.

“Not many schools provide degrees in cybersecurity, which helped me stand out from the pool of applicants,” she said. “The courses at OSUIT aided me by providing unique and applicable information.”

The second internship was with NASA’s Goddard Space Flight Center and involved creating the Secure Software Engineering Portal. SSEP is a website used by NASA engineers to learn how to secure applications. It was there she learned about Docker, Django, and practices to use to secure code.

Her final internship was a co-op as a Flight Software security engineer through ASRC Federal at NASA Goddard Space Flight Center, which she completed remotely from Oklahoma City.

“The project I worked on for this internship will be utilized for important missions like NASA’s Artemis missions to the moon,” said Adams. “Its success has led it to be awarded the 2020 NASA Software of the Year.”

Adams said that this wouldn’t have been possible without the great education she received at OSUIT.

“I hope my story inspires other students who have a dream to work with NASA to check out OSUIT” said Adams. “It’s the best feeling in the world to have had this experience with NASA and be able to continue to grow with them.”

She encourages others interested in working for NASA to apply to their internship program at intern.nasa.gov.