Our faculty are experienced chefs from some of the finest restaurants, food service management organizations and culinary institutions in the world. They have been featured in prominent industry publications, including Food & Wine Magazine and on national television programs such as Travel Channels "Food Paradise". Their impressive credentials are only second to their passion and dedication to training students to be world class chefs and food service managers. 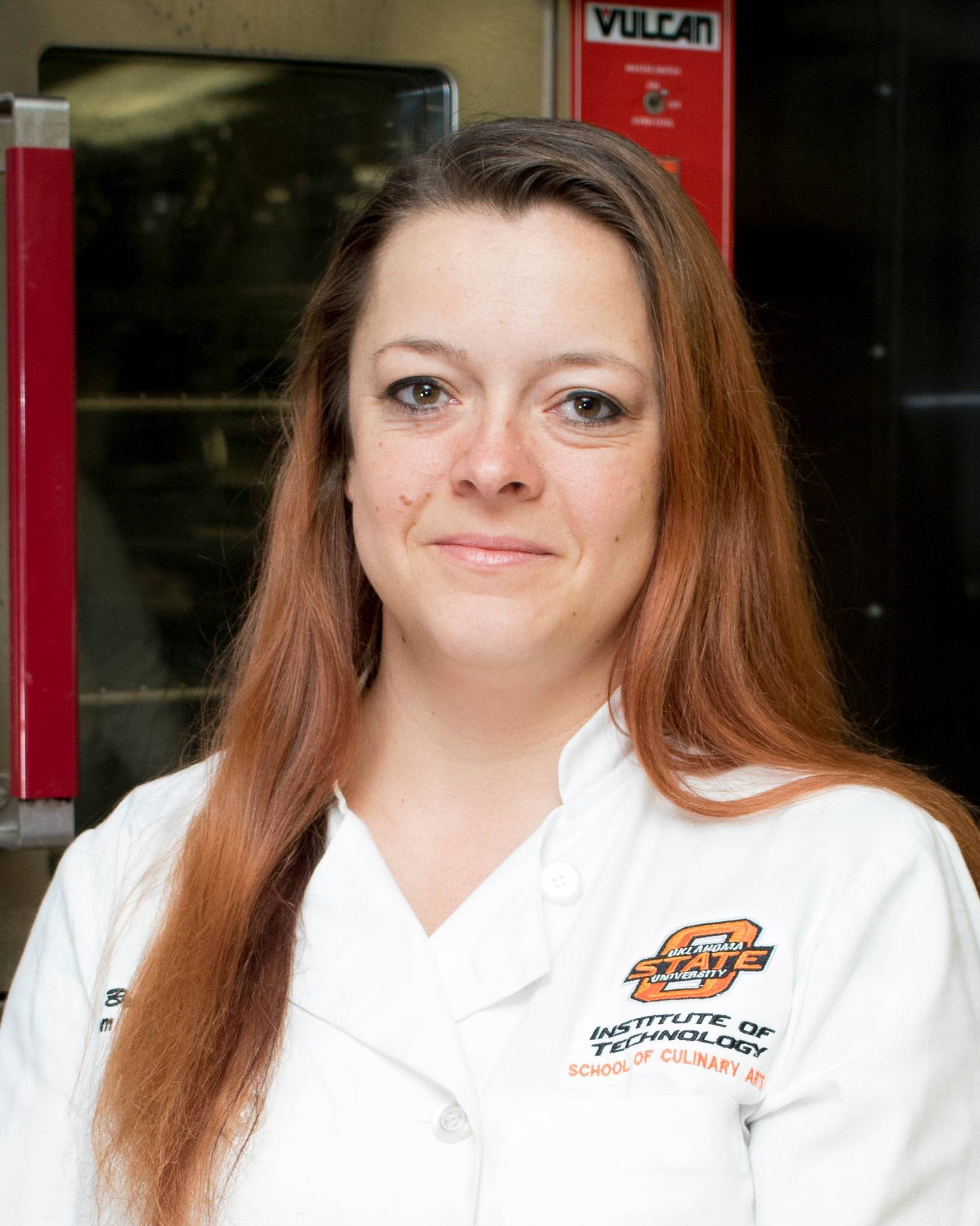 Celia Melson has been a faculty member at OSUIT since 2011. Celia was raised in the Dallas, Texas, area. In college, she spent time studying abroad at Apicius: The Culinary Institute of Florence, Italy, taking courses in Italian culinary arts and wine. She graduated Summa Cum Laude with her Bachelor of Science in Restaurant, Hotel, and Institutional Management from Texas Tech University. In 2009, Celia completed her Master of Science in Hospitality and Retail Management with a research focus of Wine Marketing from Texas Tech University. She has since been published both nationally and internationally in the subject area of Wine Marketing to Millennials. Celia has experience in both the restaurant and wine industry. Upon completing her master’s degree, she served as the Hospitality Manager at McPherson Cellars in Lubbock, Texas, where she managed the event center, wine club, tasting room and assisted with local marketing.  She specializes in teaching the front-of-the house operations and management courses at OSUIT. In 2013, she completed the Certified Hospitality Educator (CHE) Program.

Faculty
918-293-5004
ron.lheureux@okstate.edu
Chef Ron L’heureux has been a faculty member at OSUIT since 1995. He was born and raised in Connecticut and graduated from the Culinary Institute of America in 1984 training at the famous Tavern on the Green in New York City while a student. Upon graduation he joined ClubCorp in Dallas, Texas. He later worked as an Executive Chef at various country clubs throughout Texas, Arkansas and Oklahoma. Ron landed at OSU Institute of Technology in 1995 and has taught baking and pastry, meat fabrication and many other classes. He left the college in 2005 to work in sales and marketing for a wholesale food distributor. Ron later returned to our Culinary Arts program, bringing new insight and ideas. The basic fundamentals and techniques of good cooking are an important part of his teaching philosophy.

Faculty
918-293-5006
dgperry@okstate.edu
Chef Grady Perryman is a 1995 graduate of Scottsdale Culinary Institute. He then went to L’Auberge de Sedona in Sedona, Arizona, with Chef John Harrings. Chef Perryman is a accomplished pastry chef and ice carver. His work has been featured in Arizona Highways and Food and Wine Magazine. Chef Perryman joined the OSUIT School of Culinary Arts in 2005. Before OSU Chef Perryman owned and operated Muskogee Bread Works in Muskogee, Oklahoma. Prior to that he held positions at Big Cedar Lodge in Branson, Missouri, Little Italy Restaurant in Muskogee, Oklahoma, Miss Addies in Muskogee, Oklahoma, and Adams Mark Hotel in Tulsa, Oklahoma. He also serves on the advisory board for Hale High School Culinary Program.

Faculty
918-293-5141
blnimmo@okstate.edu
Born and raised in Oklahoma, Brenda developed a desire to become a chef and graduated from OSU Institute of Technology’s culinary program in 1995. Her career has taken her throughout the country and allowed her to learn and cook with countless people passionate about food, including Chef Kurt Fleischfresser and mentor Chef Kathryn Mathis. Brenda has worked at some of the most prominent restaurants in Oklahoma including Montrachet, Portobello, Bistro at Brookside, Wild Fork, T2 and Whole Food Market. She has also taught cooking classes at Bodean’s Seafood Market and served as a seasonal chef at the ABARA Ranch in Wyoming. “I always want to be growing as a chef and now I have the opportunity to share my knowledge with our students as they learn their craft,” said Brenda.

Faculty
918-293-5008
wareab@okstate.edu
Chef Aaron Ware was born in Frankfurt, Germany, where his child rearing and culinary experience unfolded. His family lived in and around Europe and traveled throughout the countries. He came to the US, where he graduated from OSUIT in 2000. Upon graduation, he moved to Lawton, Oklahoma, where he worked as Executive Sous Chef of Rinie’s Kitchen and Wine Bar. There he learned the unique style of cooking from other countries, such as Indonesian countries and surrounding Asian countries. He later became the proud owner of Cactus Carting/Private Chef Service, where he cooked for Best Pizza and Deli. This was a place where only the best products were used, and the old world style of pizza making and good and unique dishes were served daily.

Faculty
918-293-5015
becca.johnston@okstate.edu
Chef Becca Johnston has been a faculty member at OSUIT since 2017.  Being from Northeastern Oklahoma, She attended OSUIT and achieved as Associate’s in Culinary Arts in 2004.  She then went on to OSU Stillwater for a Bachelor’s Degree in Hotel and Restaurant Administration in 2006.  While attending OSU, she had the opportunity to study abroad at the Hotel Institute Montreux in Switzerland, which gave her great exposure to a variety of European cuisine.  After Becca graduated she started her career Chicago in management for J Alexanders Steak House.  She then moved to become a General Manager for Another Broken Egg Café in Florida.  After that, she worked at The Majestic Café and Gaylord Hotel and Convention Center in the Washington D.C. area.  While working for Gaylord, she received the 2012 Maryland Hotel and Lodging Association Emerging Leader of the Year.  Becca then decided to go back to her roots and moved to Tulsa.  There, she taught Culinary Arts at Platt College. She then had the opportunity to teach at OSUIT, her Alma Mater.  She teaches Food Safety, Skills 1, Skills 2, and Breakfast Cookery.  She is also serves as Advisor for the Future Chefs Association student club.  She enjoys teaching students and preparing them for an exciting career in the Hospitality industry.