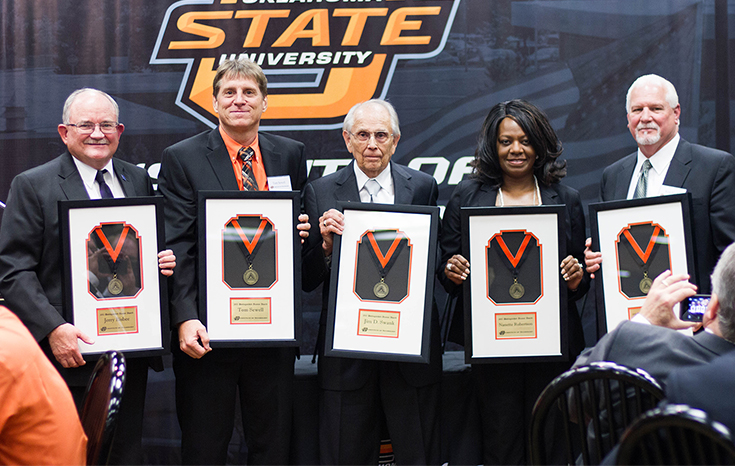 There were lots of smiles and even a few tears at the annual OSU Institute of Technology Alumni Homecoming Reception and Hall of Fame induction April 10 on the university campus.

Kirk D. Hurst, senior vice president of manufacturing and special projects for National Oilwell Varco, said the training and skills students learn at OSUIT are needed in industries around the world.“To me, OSUIT was home. The faculty was family, the staff was family and it’s a relationship that continues today,” Mertes said. “It’s amazing the opportunities this school gives you. It’s amazing the skills you gain here.”One of those who expressed heartfelt thanks for the recognition was Laurie Mertes, Art Director with Saatchi & Saatchi and founder of Laurie Lunow Design.
“It was one of the best events that I have ever had the privilege to be part of,” said Bruce Force, Director of Student Life and Alumni Liaison. “Several of our honorees choked up during their comments, you could tell how important OSUIT is to our alumni.”Ten people were honored in the second Hall of Fame ceremony. Five were inducted as Distinguished Alumni, those who are established in their professions and whose career accomplishments have been outstanding, and five were named Rising Stars, those alumni who have demonstrated significant or outstanding accomplishments within their first 10 years of graduation.

“I don’t know where I’d be if it hadn’t been for this school,” said Hurst. “One thing I can say for certain, without my education I would not have been able to accomplish the things I have accomplished. This award, it means a whole lot to me.”

The reception and award ceremony gave those honored alumni a chance to not only express their gratitude, but also share their memories of their time at OSUIT.

Executive Director of the Eastern Workforce Investment Board Nanette Robertson said she enrolled in OSUIT because of her love of computers, and the first computer she ever used was in the library on campus. Danilo Barros, director of Latin America for SST Software, said his English language skills weren't strong when he first planned to visit the university so he ended up buying a plane ticket to Tucson, Ariz., instead of Tulsa.

President of Tulsa Gas Technologies Tom Sewell came to OSUIT just to become an electrician, but an instructor saw his potential for more.

“The instructor changed my whole focus. These guys took just an electrician and woke me up and taught me how to learn,” Sewell said. “This place changed my life.” 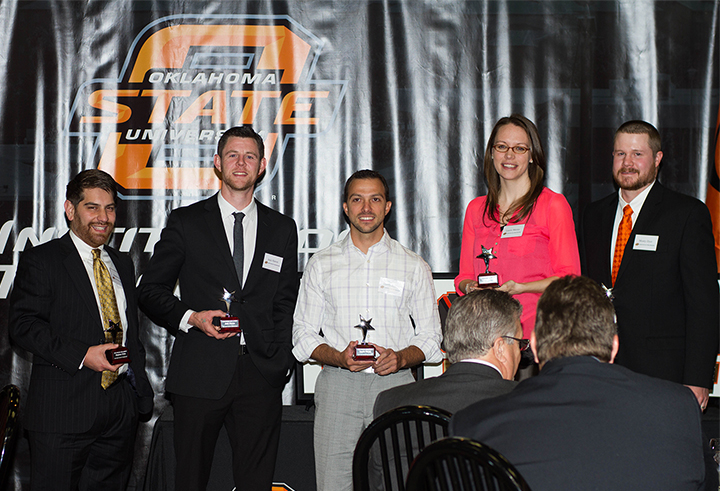 Jim Swank, retired founder and president of RAE Corp., also received some very helpful advice while he was enrolled at OSUIT. After leaving the military, Swank said everyone told him to go to school.

Force said a highlight of the event for him was seeing alumni, several he knew personally, being honored for their accomplishments and how grateful they are for the foundation OSUIT gave them.

“We have a proud heritage and our alumni are a huge part of that and why OSUIT is so successful,” he said. “In many ways our alumni help shape our future.”