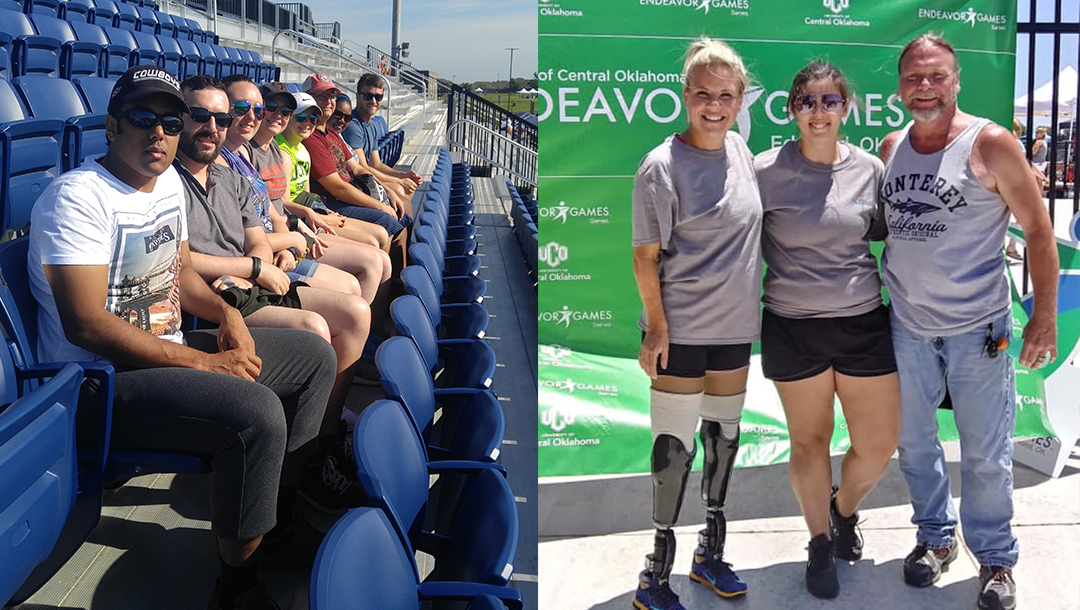 Students in the Orthotic & Prosthetic Technologies program at OSU Institute of Technology had the opportunity to see real world examples of their future careers at the annual Endeavor Games, a Paralympic event, at the University of Central Oklahoma.

“The Endeavor Games exposes the students to real world examples of the work that our students will be doing when they enter the profession,” said Madden. “The O&P program’s motto is “helping rebuild lives” and the Endeavor Games embodies that spirit of resilience and triumph over adversity and challenge.”

This year’s event, paid for with funds from the O&P club, included eight student volunteers and two additional graduates of the OSUIT O&P program.

“The two graduates had enjoyed their previous experience volunteering at the Endeavor Games so much that they both drove up from Dallas, Texas, to meet us there and volunteered,” said Madden.

This year’s event was unique for one OSUIT alumna. Christine “Chrissy” Howard, a 2014 graduate from the O&P program, is currently working with Shea (Cowart) Council, a Para-Olympian who won the gold medal at the last Para-Olympics in Barcelona, Spain.

Chrissy, who is employed as a certified prosthetic technician at AOPI Orthotics & Prosthetics in Augusta, Georgia, is part of the prosthetic team that designed and fabricated Council’s prosthesis.

AOPI Orthotics & Prosthetics sponsored Shea and Chrissy so that they could travel to Edmond, Oklahoma, allowing Shea to compete in the Endeavor Games and work to qualify for a spot on the U.S. National Paralympic Team.

This exceptional event includes competitors from age four to 69 and athletic range from novice to those like Council, who are competing for a spot on the U.S. National Paralympic team. At this year’s event, there were at least six national records broken that the students witnessed while they were volunteering.

“We had a number of Paralympic officials and parents of athletes come up to our students and thank them for all the work that they did to make the day a success,” said Madden. “It’s a great example of OSUIT students at their best and shining a bright light on OSUIT as an institution.”