ACR Alum Travels Across the Globe to See Friends, Help His Alma Mater

ACR Alum Travels Across the Globe to See Friends, Help His Alma Mater 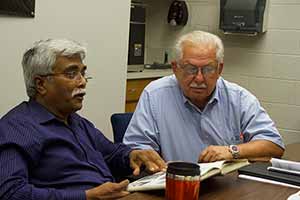 Knowledge, work and relationships are what Chenniappan Gopalakrishnan values most in his life. All three converged on a recent trip to his alma mater, OSU Institute of Technology.

Every few years Gopalakrishnan, or Gopal as he is known, joins his fellow class of 1971 graduates from the Air Conditioning and Refrigeration program for a reunion on campus.

When they first enrolled in the ACR there were 66 students alongside them, but only 14 made it to graduation in 1971. The rigors of the program created a strong connection between the men.

“The whole chemistry of the group. We did a lot of things together. We would be together in class, after school hours we had the chance to get together. A bond happened,” Gopal said.

Some came straight from serving in the military, others came to OSUIT right out of high school. Then there was Gopal who came from southern India and attending OSUIT was his first trip abroad.

“Something about the time period, we were close. We really enjoyed what we had,” said fellow ACR alum Frank Howard.

The group has remained tight-knit for more than 40 years, first through writing letters and now with email.

“It’s called brotherly love,” said Rick Howard, who was the youngest in the class.

Everyone had his own reason for enrolling in the ACR program. For Gopal, it was for his family’s business.

“My family had a dairy business, but I wanted to study engineering. My father said ‘Why don’t you go into refrigeration? It will help our dairy business and it involves engineering,’” Gopal said.

After meeting a visiting Rotarian and asking about refrigeration programs in the U.S., he learned there was one in Oklahoma. By January 1969, he was on the OSUIT campus.

“It was the first time I saw snow,” he said, and it was also the first time OSUIT had a student from India. “In 1969, I was an attraction on the street.”

After graduation the group started their careers and all have done well, some even coming back to OSUIT as instructors.

Gopal worked for a Tulsa-based hotel chain for a few years before returning to India to continue working in his family’s dairy and grocery chain Nilgiri Super Market.

With Gopal’s help and leadership, his family’s grocery chain became of the largest, most successful and well-known businesses in southern India.

He never forgot his alma mater, the education he received or the friends he made.

“Self confidence came to me while I was here at OSUIT,” Gopal said. “I had the family business and there were times I had to come to the U.S. I always made it a point to come here and see these guys.”

The group’s first reunion was in 1988 at Howard’s home.

“When he first started meeting, it was just a bunch of friends getting together,” Howard said.

Several years ago, the university began hosting the group so they could tour the campus, speak with current ACR students and meet with administrators.

“We have a deep appreciation for this school, what it did for us and how it shaped our lives,” said alum Mike Brannon. “This school serves a specific need. Look at what it’s done for us. I think sometimes schools miss establishing relationships between alumni and the university. Everyone in this room has sent tons of students here. Alumni are full time recruiters.”

He’s now working with OSUIT’s International Office on increasing enrollment of students from India and on building partnerships and relationships with other reputable technical schools in India.

“Computer technology, we’re on top of that,” Gopal said, but training programs for more hands-on technical fields like automotive, construction and refrigeration need updating. “There are polytechnic schools in India, but many are teaching on equipment that is out-of-date.”

The middle class in India is booming and many families are eager for their children to get an education abroad, Gopal said, it’s just those families aren’t familiar with what OSUIT and its mission.

“People know Georgetown in Washington D.C., and Cornell University in New York. Oklahoma, it’s not known in India,” he said.

And when it comes to his businesses, Gopal said degrees from those types of universities wouldn’t help those looking for a job in his companies.