ACR Instructor to Retire After 43 Years

ACR Instructor to Retire After 43 Years 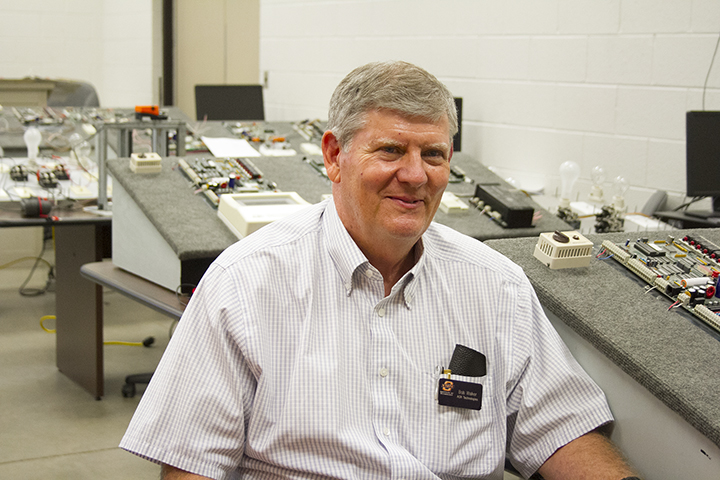 When Bob Walker tells the story of how he came to teach at OSU Institute of Technology’s Air Conditioning & Refrigeration program, he speaks as if it was just luck of the draw, a coincidence, and not something he was destined to do for 43 years.

Walker originally was going to be an engineer. He graduated from OSU Stillwater with a degree in chemical engineering, but with a downturned economy at that time, jobs in that field were few and far between.

“I went to interview after interview; things were slow,” he said, so he moved back home to Okmulgee. “My roommate at the time, a friend of mine who was also from Okmulgee, he told me he was thinking about taking electronic classes out here (at OSUIT), so we both enrolled.”

Those classes, some of which were taken through the ACR program, led to certifications in industrial electronics and industrial instrumentation. At that same time, ACR was starting a new course—electronic controls—and Walker was asked if he would be interested in teaching it.

“I had never considered teaching before, but I thought ‘That’s something I might like,’” he said, and obviously he did. “The way we teach here is more hands-on and troubleshooting. We have some students who come in here and haven’t done that well at school before, but here they flourish. They find something rewarding to them, and they can go out and find success.”

Walker is proud of his former students, many of whom have gone on to success by starting and running their own businesses and becoming leaders in the industry in Oklahoma.

“I see their company’s banners or their faces on the plaques in our hallway,” he said. “It’s rewarding to have your students do well.”

In fact, all of the other instructors in the ACR program were students of Walker.

“I know for myself, being a former graduate of this program in 1994, I used what I learned from Bob Walker as much or more than I did from any other instructor,” said Paul Margwarth, who now teaches alongside Walker. “With the other instructors, in private it’s comfortable to call them by their first name. I think to all the other faculty members who had him personally as an instructor, he will always be known as Mr. Walker. Not just because he was our instructor, but because of the man he is.”

During his 43 years of teaching in the ACR program, Walker taught several courses including electronic controls, unitary refrigeration, and system controls, which is now called energy management that focuses on the interface between computers and system controls. It’s an industry that is always changing so instructors have to keep learning, which is one reason Walker has stayed at OSUIT for so long.

“Through the years we’ve seen changes in refrigeration, and government regulations have increased the need for energy efficiency. There are new types of motors, and systems have changed to make them run more efficiently,” he said. “And we keep up with the changes. It’s not like I’ve been teaching the same things year after year. I’ve kept learning.”

Roger Shepherd, ACR program chair, said Walker has been the go-to guy for any issue facing the department, whether technical or personal.

“All of us here had him as a teacher, and we look to him for so much history and learning. It will be a challenge, but we will all step up and keep moving forward. We will never replace Mr. Walker, but we will forge ahead,” Shepherd said.

Like many before him, Walker said the biggest thing he will miss after he retires is the people.

“I enjoy the people I work with. But I turned 67 this summer. I was 23 when I started,” Walker said. “I’m definitely looking forward to retirement, but at the same time, if you do something for 43 years, it’s going to be different.”

It’s not as if Walker is riding into the sunset though.

“My wife and I live out on a farm. It’s a family farm of about 160 acres out west of town. We have cattle and pecan trees. In the last few years I’ve been trying to position myself to make more of a profit from the farm,” he said. “I can set my own hours, catch up on things I haven’t been able to do in the last few years. I’m ready to transition into working on a farm, devoting a little more time to it.”

Still, Walker will be missed.

“I will miss sitting across from him at lunch and talking about everyday things,” said Matthew Davis, another former student and now colleague. “Mr. Walker is always a positive influence and a true mentor. I do not think he will ever truly be replaced.”

A retirement celebration for Bob Walker will be held Wednesday Aug. 31 from 1:30 to 3 p.m., in the ACR Building. It will be a come and go reception with cake and ice cream.