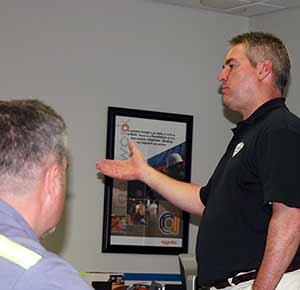 Second-year Aggreko students heard from a special guest Tuesday afternoon. Paul Hines, Aggreko Event Services Operations Manager, recently returned from Russia where he was working on major winter projects for Aggreko and shared with the students experiences from the event services side of the company.

“I’m going to tell you how the even group fits in with the company, the do’s and don’ts and what makes a great event technician,” he said.

It was a chance for the students, who will graduate in the summer, to hear first-hand about one small, but important, arm of the power generation company.

Hines has been with Aggreko for almost 24 years and said specializing in event services wasn’t in the original plan for the company.

“We stumbled into the event world,” he said when, in the late 1980s, broadcasters came to Aggreko after having problems working with utility companies during live events. “The first event job I worked was the ’88 U.S. Open golf tournament.”

“You might be under the stage at an inauguration, on the 50-yard line at the Super Bowl or at the 18th hole at the U.S. Open,” he said, but it’s not as glamorous as it sounds. “The time commitment is a lot; you’re on the road a lot. It’s not for everyone.”

When AES is hired, the supervisor for that event pulls Aggreko technicians from local service centers to work that event, Hines said, and over time supervisors have developed a list of technicians they trust and request again and again.

“There’s a core of about 10 to 12 techs we use for events and none of them are getting younger,” he said. “We’re getting older and it’s not an old man’s market. We want young people, we want new people.”

AES worked hundreds of events last year, generating millions of dollars in revenue, and is the 4th largest sector of Aggreko’s net business. AES is growing and requiring more of Aggreko’s technicians.

Starting this year, AES will conduct event services training with technicians working in those six hubs who will likely be asked to work events. Hines doled out some of those lessons to OSUIT students Tuesday afternoon including always be safety conscience; behave professionally no matter the event or client; ask questions if you don’t know something, but also have confidence in your work.

“You’ve been trained better than any first year out there,” Hines said. “Be confident. You have the tools, use them.”