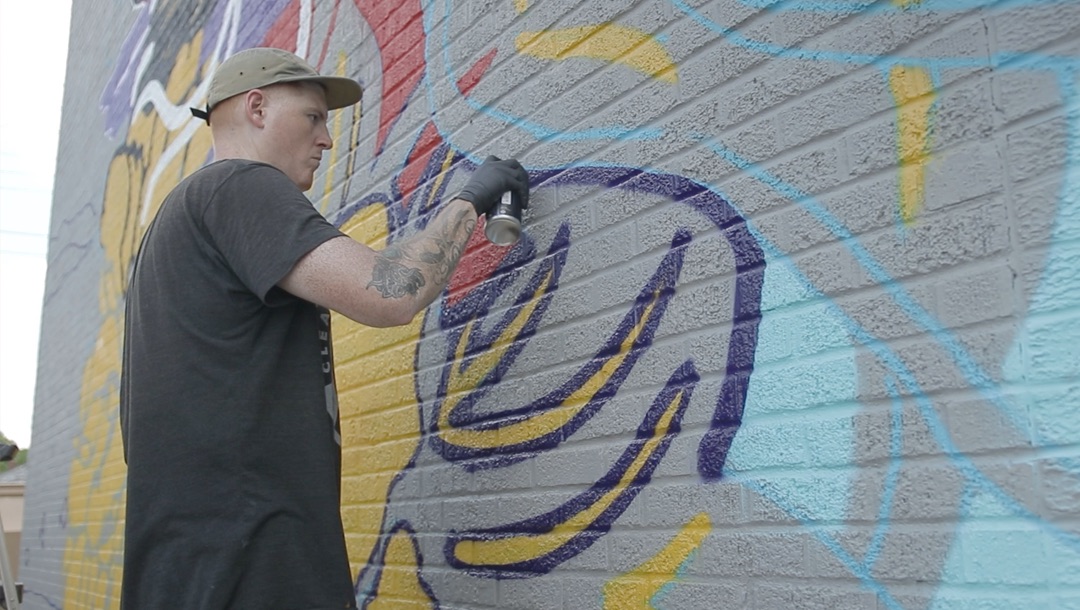 OSU Institute of Technology alumnus Aaron Whisner is the co-owner and designer of Clean Hands, the finalist who was chosen to paint downtown Okmulgee’s latest mural.

Clean Hands, a mural and design crew, painted the new mural on the east side of the Okmulgee County Homeless Shelter Thrift Store building, located at sixth and Porter Avenue in downtown Okmulgee, during the recent Okmulgee Pecan Festival.

Originally from Tulsa, Whisner, who graduated from the Graphic Design program in 2004, said that he feels like his education at OSUIT played a role in his career success.

Whisner said his classmates were the most memorable part about his time at OSUIT. “Working around so many talented people pushed you to get better.”

Currently split between Columbus, Ohio, and Tulsa, traveling for his passion is not new to Whisner. While at OSUIT, Whisner traveled to New York for his internship at Zago Design, a strategy and design studio that helps social change organizations.

After graduation, Whisner went on to work for a print company in Nashville, Tennessee, designing T-shirts and other custom merchandise. In 2012, he started Clean Hands, in Tulsa, primarily as a print shop and storefront to sell their tee shirt line and graffiti supplies. Clean Hands’ mission is to enhance the city and inspire cultural growth.

Okmulgee Main Street reached out to Clean Hands to submit a proposal for a new downtown mural and Whisner jumped at the prospect.

“I wanted an opportunity to come back to Okmulgee and do a piece where I went to school,” he said.

Whisner said the process of creating the mural, which took a day and a half to paint, was pretty simple.

“There weren’t many design requirements, so we were basically free to do whatever we wanted,” said Whisner. “We’ve been playing a lot lately with floral and nature imagery, along with abstracted brush strokes and type, so this was a fun one to make.”

He said their approach to creating these large murals always starts the same way, getting the size and layout of the wall on paper.

“From there it’s just moving a bunch of scanned brush strokes and other elements around in Adobe Illustrator to achieve the vision,” Whisner said. “We’ve been drawn to a lot of plant imagery lately and we felt this style fit in well with the surrounding environment.”

Clean Hands has worked on a number of murals in the area. Whisner said the Woody Guthrie Mural they painted was a game changer.

“I think that one really catapulted us and the whole mural scene in Tulsa,” he said. “Since we painted that one in back in 2013, it feels like every month or so a new piece goes up somewhere.”

Clean Hands will be showing new paintings at the TAC Gallery, in Tulsa, every Friday and Saturday through the end of June.