ART Plus to Highlight Talent of Alums

ART Plus to Highlight Talent of Alums

It’s no secret that graduates who have come out of OSU Institute of Technology’s Visual Communications programs in the last 60 years are talented graphic designers, photographers and 3D animators.

What’s not as well known is many have also become accomplished fine artists.

“We’re enigmatic to some. The public at large, and to some degree, the art community in general would like to make distinctions between commercial and fine art,” said James McCullough, Visual Communications division chair. “We know that the talented people that come through this program are simply artists, regardless of how that is defined.”

In an effort to combat that mindset, the Visual Communications division is debuting ART Plus, an exhibition and silent auction composed of artwork created by alumni.

The exhibition runs from March 19 through April 10 in the DIY Gallery of AHHA, the Arts & Humanities Council of Tulsa’s Hardesty Arts Center, at 101 E. Archer St., in Tulsa. The silent auction is April 10 from 6 to 9 p.m.

The auction will raise money for a new scholarship aimed at helping second-year VisCom students continue their education. The public is invited and encouraged to attend the auction and support student scholarships by purchasing art for their collections.

“It’s a continuing problem. Students come in and have funding for the first year. For a lot of them, there’s no funding beyond that first year,” McCullough said. “We’ve seen some of our best students, our most promising students, have to step out. They leave, and it’s extremely hard for them to come back.”

This first year’s exhibit will feature paintings by graduates such as John Hammer, Christopher Westfall and Gil Adams, alumni who found success both in their commercial art careers as well as fine artists. 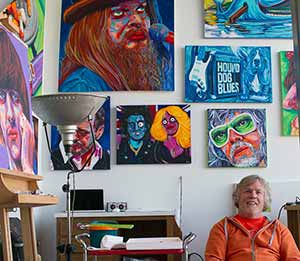 Hammer worked for nearly 30 years as a graphic designer before deciding to pursue a career as a painter.

His pieces now have a distinctive look and feel that are clearly John Hammer works.

“My wife calls it pop impressionism. I paint with color and fun. I paint them how I see them, how they should be,” he said. “I think this is who I am. This is who I’ll be.”

Gil Adams worked as a graphic designer and illustrator until he retired last year. He always painted in his free time, but now he’s making a second career out of it.

It’s not that big a change, Adams said.

“I still think the same way. The technique is different, different values and composition, but the same principles apply,” he said. “It’s the same mindset. You have a blank surface and you have your tools. There’s a lot less difference than there used to be.”

Hammer said he still uses the skills and techniques he learned at OSUIT when he’s painting.

“I look at my work and I see a heavy influence of graphic design. That education and that time made me who I am today. I wouldn’t trade it for anything,” he said. “Putting a painting together is no different than putting an ad together. It has to feel right and look right.”

In future ART Plus shows, other mediums and styles will be the focus of the exhibit in order to showcase the strengths and talents of OSUIT’s many VisCom graduates.

“There’s still a design element you’ll see in all these people’s work. They’re pulling that into the work they do, simply because it’s who they are now,” McCullough said.

Hammer, who is entering pieces into the exhibit and auction, said he’s glad his work can help future OSUIT graduates.

“Bottom line, we’re all artists,” he said. “Anybody going into that Visual Communications program and coming out of that program in the last 35 years is an artist in my opinion.”

For more information visit the ART Plus exhibition website and see the segment about ART Plus on Good Day Tulsa.