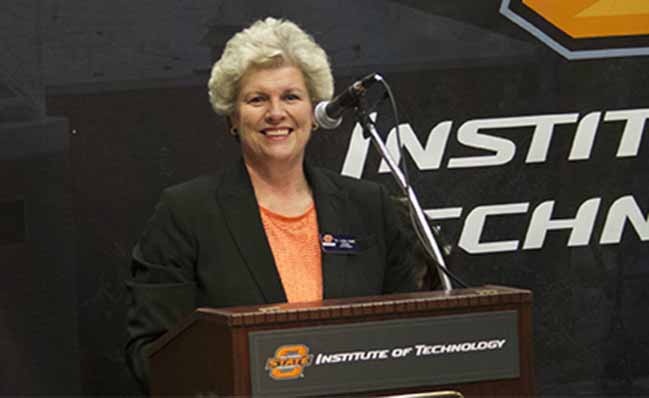 We cordially invite you to attend a retirement reception in honor of Dr. Linda Avant Executive Vice President of OSU Institute of Technology.

When Linda Avant started out as a teacher at Fort Cobb High School, she had no idea her life would lead her to Okmulgee and OSU Institute of Technology.

“I was very content just being a high school English teacher,” said Avant, who will retire from OSUIT on Aug. 1 after 26 years working in a variety of positions from coordinator of planning and evaluation to executive vice president, and various roles in between.

During her time at OSUIT, Avant said she has served as interim department head, interim division chair and interim vice president in practically all the divisions and offices on the campus.

“You get to know everyone. Every time I filled in, I learned more about the campus and the procedures. I gained experience,” she said.

She’s also been integral in the university’s strategic planning and articulation agreements, which align courses and allow credits to be transferred between institutions.

“I’ve been on that since the beginning. In the early days there was skepticism of, ‘If it sounds too good to be true, it must be,’” Avant said. “Now they’re common place. They’re expected.”

Before she came to OSUIT, Avant also taught at Caddo Kiowa Technology Center and then worked at the state level for Oklahoma CareerTech.

After her husband got a job teaching at OSUIT, she soon followed suit because she was ready to be back on a school campus.

“That was one of the lures of coming here. Even though I wasn’t in a classroom, I was around students,” Avant said, and she never left. “There’s always something new and interesting and unique. You never set out to stay somewhere very long, but things happen. You turn around a few times, and then it’s been a long time. I can’t believe it’s been 26 years.”

In that time, there have been so many developments in accreditation, academics and administrations, and Avant has been a part of it all, including working to bring associate in science degrees and bachelor of technology degrees to OSUIT.

“I’ve seen us mature as a provider of general education,” she said.

Avant has also seen tremendous physical changes to the campus.

“You think about the campus 25 years ago and what it is now— the changes I’ve seen,” she said, including the construction of the Student Union, Donald W. Reynolds Technology Center, Allied Health Science Center and the Chesapeake Energy Natural Gas Compression Training Center, as well as major renovations of Grady W. Clack Center and the Library.

“When I came the Noble Center for Advancing Technology was new. Now I’ve seen a second phase added to it.”

Avant’s retirement is bittersweet for those who have worked closely with her.

Kathy Avery, counselor in the university’s Counseling Services, said Avant has always been approachable and open to others’ ideas, and she considers her a friend as well as her boss.

“We have a wonderful working relationship, and I am glad I have had the opportunity to work with her,” Avery said.
“She has been supportive of me both professionally and personally, and she has always been willing to offer encouragement and guidance.”

Chef Rene Jungo, Culinary Arts division chair, said while Avant was interim program chair of his division, she brought wisdom, organization and experience. She is always available and one of the most well-respected administrators on campus.

“I was very sad at first when I heard she was retiring, but then so happy for her to be able to walk away with such class and savoir faire.”

While Avant has always had a hand in the institution’s future, she’s also been instrumental in reconnecting with its past.

“Since 1946 we’ve never had an alumni relations office,” she said, but progress has been made with Avant spearheading the advent of alumni relations on campus, as well as an Alumni Hall of Fame ceremony and outlets for alumni communications.

Soon Avant herself will be one of those who count OSUIT as an accomplishment of her past. She’ll be trading in her business attire for something more suitable for ranch life.

She and her husband started their ranch just a few miles south of Okmulgee as a side business and something to have going when they retired.

“The ranch operation took off quicker than we thought. The farm and ranch were ready before we were,” said Avant.

Her husband retired from OSUIT four years ago, and now Avant will join him to help with their growing cattle operation.

But she still plans to visit campus occasionally for events and to see friends.

“I’m very proud and very excited about the institution’s future,” she said, but she’s glad to hand off the torch.
“There’s going to be others that will carry on, and I’ll be in the stands watching.”