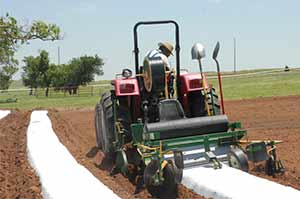 Micah Anderson will tell the story of his family’s roots of farming in Oklahoma, not as himself, but as his father, as part of OSU Institute of Technology’s recognition of Black History Month.

Anderson, along with other members of his family, will give the presentation on Feb. 14 at 11:30 a.m., in the PSO Lounge of the Student Union. The cafeteria will also serve soul food for lunch that day.

Anderson, who is an OSUIT alumnus, has collected his father’s records and paperwork that document his family’s history as one of Oklahoma’s many black farming families.

Through these records, Anderson has pieced together a presentation that details his family’s history as farmers as well as incorporates elements of the state’s black history.

“I decided to act out my dad’s life. He farmed and he never worked for anybody. He lived off the farm,” he said, and his grandfather moved from Mississippi to Oklahoma and began farming. “When the Tisdale family came to Oklahoma, they actually ate at our table.”

Farming is an important part of black history in Oklahoma, Anderson said, and it’s at the core of many historically black towns in the state.

“They founded those towns to farm and garden. They all have real fertile soil,” he said. “It’s amazing some of the agriculture the black farmers were doing. It’s a pretty good history that I don’t think people know about.” 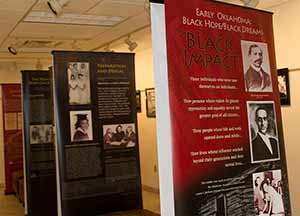 In addition to the presentation, the traveling exhibit “Black Hopes/Black Dreams,” on loan from the Oklahoma History Center, will be on display in the Conoco Gallery of the Student Union all month long.

Force said it’s important to offer a variety of events so students can engage in Black History Month.

“We try to hit it on different levels. Not everything will touch everyone in the same way,” he said. “We look for different things to do. We’ve brought in different speakers, singers, storytellers, a little bit of everything.”

Anderson will shed light on the history of black farmers in Oklahoma and his father’s experiences working on his farm near Haskell. His nieces will also be part of his presentation singing songs from that time period.

He said there aren’t many black-owned farms in Oklahoma any more as people moved to the urban areas.

“My generations and those a little older than me went to Tulsa and Oklahoma City and jobs at factories or plants,” he said because the pay was better and more steady. “It sucked us away from the farm.”

Anderson was no exception. He studied in the Automotive Division at OSUIT and worked for nine years at several dealerships in Florida in the auto body centers.

“When my dad and mom got married they had a mindset they were going to be farmers,” he said. “I went to OSUIT to get out of the family business.”

Anderson has now returned to his roots farming at his home in Piedmont and working with other small farmers as the market development coordinator for the Oklahoma Department of Agriculture.