Blanket Drive Heats Up at OSUIT

Blanket Drive Heats Up at OSUIT 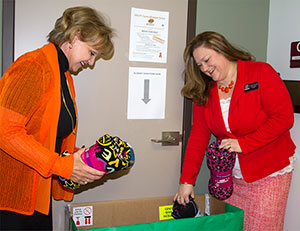 Donating blankets to KTUL’s annual Spread the Warmth campaign is something Arts and Sciences Division instructors Glenda Orosco and Dr. Maria Christian do on their own every winter.

This year they decided to take it further and reached out to the entire OSU Institute of Technology campus.

“We thought, there are probably students and faculty who live in Okmulgee who would like to help but can’t take their donation to one of the drop-off sites in Tulsa,” Christian said.

So when the spring semester started in early January, she and Orosco gathered boxes and placed them at three locations on campus and started the first OSUIT Cares Blanket Drive in conjunction with television station KTUL’s Spread the Warmth campaign.

“We’re getting a lot of interest,” Christian said. “A simple idea dominoes.”

And the drive isn’t limited to people on campus, she said. If there are those in the Okmulgee community who wish to donate, they are more than welcome to drop off blankets as well.

Collection boxes are located at the front desk area and Suite 212 of the Noble Center for Advancing Technology and at the Learning Resource Center.

People can drop off new or gently used blankets by Jan. 27, when they will be taken to one of the Spread the Warmth drop-off sites in Tulsa.

The campaign’s goal this year is to collect 5,000 blankets for those in Tulsa and surrounding communities who are in need.

It’s an easy way to help someone who is cold this season, she said.

“You can pick them up when you’re out shopping, you can find them on sale,” Christian said.

“Many of us need to clean out our linen closets,” she said. “Our campus is extremely generous.”

With such a positive response already in such a short time, Christian and Orosco hope to organize a blanket drive again next year.

“I don’t think it’s difficult and getting the word out is easy,” Christian said. “I think it could turn into an annual thing.”