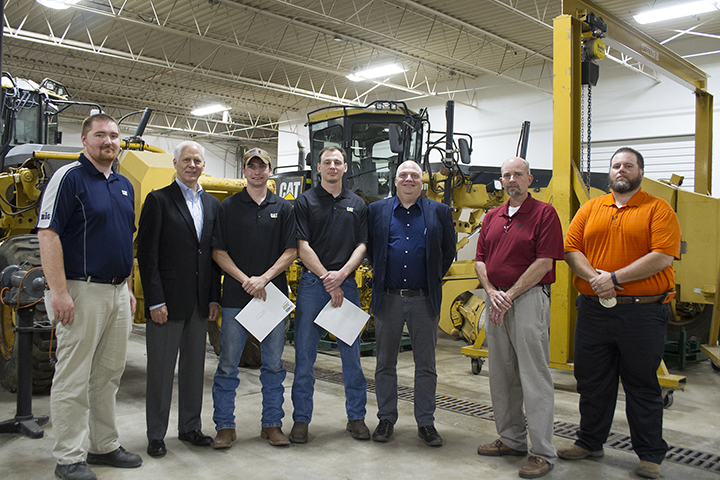 CAT® Dealer Prep students Jamee Kirmer and Ty Marshall will soon be starting their technician careers a little more prepared thanks to a tool scholarship from the mikeroweWORKS Foundation.

The two, who will both graduate from OSU Institute of Technology in August, were each awarded a mikeroweWORKS Foundation Tool Scholarship for $1,000. The scholarships are given to the top two students at AED (Associated Equipment Distributors) accredited colleges or programs.

The mikeroweWORKS Foundation supports and promotes skilled trades and grants scholarships to men and women who have an interest and aptitude in mastering a specific trade.

“It was a welcome surprise,” said Kirmer, who will go to work full-time at Foley Equipment in Wichita, Kansas later this summer. “It definitely helps starting out. The tools are probably the biggest expense when you start working.”

Marshall, who will work at Riggs CAT® in Little Rock, Arkansas, said he didn’t even know there was a tool scholarship available before he received word he had won it.

Robert Henderson, executive vice president and chief operating officer of AED, was on hand in May to present Kirmer and Marshall with their scholarships.

“The AED Foundation is 25 years old, and we’ve been working with the mikeroweWORKS Foundation for at least six years,” Henderson said. “It’s a great program. They are so particular on where these scholarships go.”

Marshall and Kirmer’s path to the CAT® Dealer Prep program were very different, but both have excelled in the program. Marshall said he got his start with engines as a teenager.

“I did oil changes, things like that,” he said, so he originally thought his future was in cars and trucks, but he found something he enjoyed even more. “I like the large equipment. You have room to work. You have to have special training to be a diesel mechanic.”

Kirmer served in the U.S. Marine Corps for eight years as an explosive ordinance technician so he had some mechanical experience before enrolling at OSUIT.

“The mechanical aspect, the experience helped, but the engine part was completely new,” he said. “It’s not as oily and dirty as you think.”

The job at Foley Equipment gave him the opportunity to pursue a degree.

“The company I work for, OSUIT is one of two schools we can go to for training, and people told me this was the better one,” Kirmer said. “All the instructors are great, helping you enroll, getting you in the field. And it’s a guaranteed job. You don’t have to job search after you graduate.”

“You’re doing the classroom work and then turning around and going to work and putting that knowledge to use,” he said.