Chamber of Nightmares coming to downtown Okmulgee this Halloween

Chamber of Nightmares coming to downtown Okmulgee this Halloween 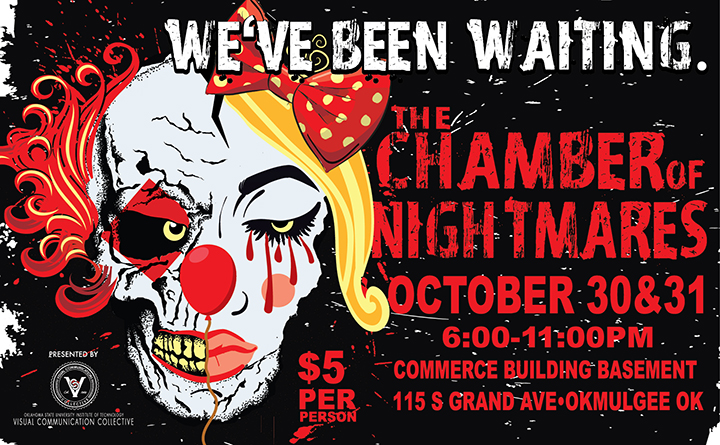 Creepy dolls that look at you with black eyes, mutant toys that come to life to attack, and, of course, scary clowns.

Admission is $5 with proceeds going to the student club. Participants can also get their pictures taken with some of the Chamber of Nightmare characters for $5.

This is the second year the VCC has hosted a haunted maze downtown. Last year the students transformed the basement into a haven for a zombie horde, but this year they wanted to do something different.

“The Chamber of Nightmares theme gave us more flexibility in what we could offer in terms of the scare,” said Brian Caldwell, a Visual Communications instructor and VCC club sponsor.

The club’s officers started brainstorming ideas and themes back in early August.

Kristen Cowan, VCC vice president, said they really wanted to tap into what would was scary when they were children.

Caldwell said the action won’t be too intense for all ages. Those under 9 years old will be given a glow stick or glow necklace so the actors inside the maze will know to decrease the scares with those groups.

And the venue, the Commerce Building basement, couldn’t be better, he said.

“There are areas we’ll dress out, but it won’t take much to add to the creepy factor,” Caldwell said. “The owner of the building is really supportive.”

“I was really surprised with the attendance. I was really excited about it,” said Erico Smith, VCC president. “This year it’s going to be a lot more fun and whimsical.”