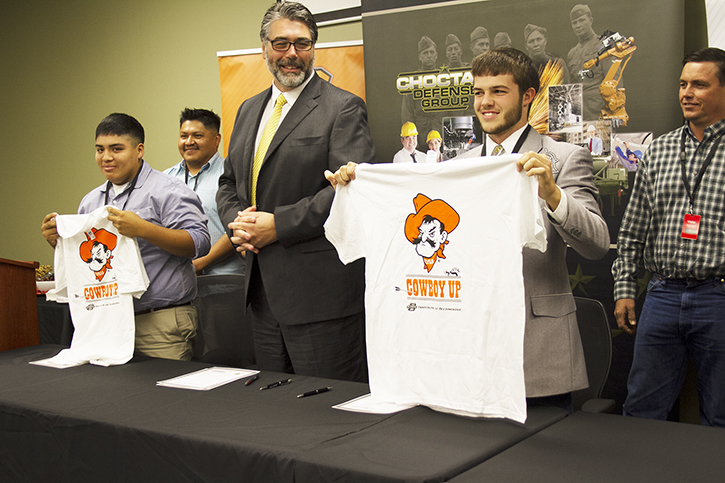 MCALESTER— More than 30 people gathered in a room at Choctaw Defense to recognize two new members of the manufacturing company's workforce and OSU Institute of Technology’s newest students at a signing event Tuesday May 26.

Tanner Williams and Colby Crosby signed sponsorship agreements along with Choctaw Defense President Stephen Benefield at a ceremony similar to those held for student athletes about to enter college.

Choctaw Defense, the country's leading Native American defense manufacturer headquartered in McAlester, will provide Williams and Crosby scholarships to attend OSUIT, provide paid internships at the facility and then full-time employment when they graduate from the university's Manufacturing Technologies program.

“In a couple years, these two young men will be joining their graduating class. and they'll know exactly where they'll be working the following Monday,” said OSUIT President Bill R. Path. “So many people are graduating from college without the skill sets they need to join the workforce. Going to college shouldn't be about finding yourself, but about finding a job.”

Benefield said Choctaw Defense is continuously looking for qualified people to work at the facility, but it’s become difficult to find people who have the skill sets the company needs.

“We want to continue to grow, but we cannot grow without qualified people in the pipeline," he said, so Choctaw Defense is investing in its future employees before they ever set foot on the plant floor through sponsorships to OSUIT.

Crosby just graduated from Wright City High School and learned about Choctaw Defense at a Career Showcase hosted by OSUIT and the manufacturing facility in 2014.

The prospect of sponsorship piqued his interest so he toured the campus.

Crosby was honored to be recognized at the signing event.

“It makes me feel like Choctaw Defense cares about their employees and when I visited OSUIT it felt like home,”he said.

For Williams, who graduated from Blanco High School a year ago, being a sponsored student means a lot to him.

“It feels good. It feels like I accomplished something. They're real nice people at Choctaw Defense," he said. "I like what they do. I like to put things together and work with my hands."

“These young men don't want to be paper pushers, they want to build something with their hands and help defend our country," he said.  "We are very excited about this new opportunity."