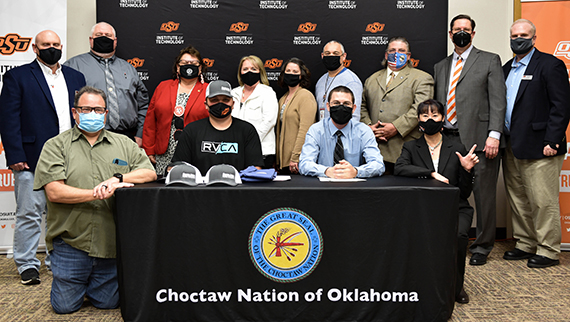 As a child, Brayden Allen would spend time with his father who worked in the oilfields of Oklahoma. Although he appreciated the quality time, he never understood the terms his father attempted to explain. Flash forward several years later, now that Allen is grown up and attending OSU Institute of Technology, he says he knows exactly what his father was talking about and he’s even got a few things to teach him back.

A signing ceremony was held on the OSUIT campus for Allen as he has been selected to receive a full sponsorship by the Choctaw Nation to attend OSUIT. For this, the Choctaw Nation has committed to providing Allen with funding toward college expenses, branded apparel to wear while on campus, a paid internship and will provide full-time employment with Integrated Services of the Choctaw Nation.

Upon graduating from OSUIT, Allen will receive an Associate degree in Applied Science in Air Conditioning & Refrigeration.

"Chief, Assistant Chief, the Council and I are very excited to see this partnership come together,” said Jennifer Woods, District 6 Councilperson and Chaplain of the Choctaw Nation. “Allen is an outstanding member of the Choctaw Nation, and we are happy to see his hard work rewarded with this sponsorship.”

Woods said, “Being able to support our tribal students in their education and certifications, and then providing them a place to work for our great Nation is what it's all about."

“There is a growing need for reliable and skilled technicians in maintenance fields,” said State Rep. Scott Fettgatter. “Choctaw Nation’s commitment to building its talent pipeline with its citizens is admirable. But, they took it a step further and they’re investing in the education of its next generation workforce through sponsorships like this one today between Allen, a citizen of Choctaw Nation and Integrated Services.”

The opportunity presents a mutual partnership between a sovereign nation, Choctaw Nation and OSUIT to utilize and depend on one another and return benefits, growth, and resilience back to the communities that comprise the Choctaw Nation.

“What is happening today is the foundation for Oklahoma's tomorrow,” said Fettgatter.

Dr. Ina Agnew, vice president of Student Services sent appreciation to the Choctaw Nation and praised them for understanding just how important OSUIT is to workforce development.

“Choctaw Nation not only understands this, but has capitalized on it to build their talent pipelines by sending people from its Nation to OSUIT, and then bringing those graduates back home to work,” said Agnew. “That is the very definition of how small communities benefit from economic development and growth.”

The HVAC industry is continuing to see workforce shortages. David Redenius, MEP manager of the Choctaw Nation said the demand for those technicians is expected to rise 15 percent between 2016-2026 and that by the end of the term, most of those workers are expected to retire.

“The Choctaw Nation has been following those trends because we need skilled workers in our tribe to service the needs of our people,” said Redenius.

Steve Olmstead, dean of the School of Engineering & Construction Technologies reminded everyone attending that the ACR program was one of the first programs offered at OSU Institute of Technology in 1946. The school was known for preparing and retraining service members returning from WWII, searching for new career placement.

“Our program’s reputation is unsurpassed in the state of Oklahoma and in many surrounding states, too,” said Olmstead. “We have an average of six job offers per technician and the demand for more technicians continues to grow.”

Allen wrapped up the signing by reflecting on the time he spent with his dad.

“I didn’t understand those terms,” said Allen. “But now that I am attending classes, it clicked. I’ve learned so much in such a short amount of time. I can only imagine what I’ll learn in the next year and a half.”