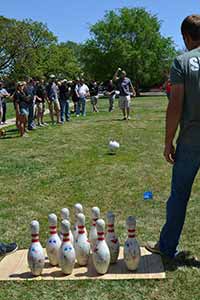 OSU Institute of Technology’s student chapter of the American Society of Civil Engineers had a secret weapon at a recent competition, and its name is Wilson.

The student club took first place in the Concrete Bowling Competition during the 2014 Mid-Continent Student Conference last month hosted by OSU Stillwater. Wilson is the name of the 12-pound concrete bowling ball that helped them earn that top spot.

The competition has two parts: design and appearance of the bowling ball, and then the practical element– how well can you actually bowl with it. Teams have to bowl five frames using the same ball.

As a nod to the film “Cast Away,” their bowling ball was painted to look like the iconic volleyball from the movie complete with red handprint and Wilson logo.

Duane Garrett, a civil engineering technology student from Tulsa, said this was the second year the club participated in the competition, this time with some changes to the design process and a drastically different outcome.

“We went with a much lighter concrete. It’s a floating concrete mix, which is where we got the name Wilson,” Garrett said. “Several people saw our ball and said ‘You win.’ We heard people say ‘There’s Wilson’ several times during the day.”

Both years, the team utilized the technology available to them and created a round mold for the concrete ball using the 3D printer in the manufacturing program, something no other team had done until last year.

The bowling ball was made more than a month before the competition, with just one other created as a practice ball for the team’s bowlers. It’s just like regular bowling— 10 pins at the end of a lane, players trying to get strikes and spares— but it’s played outside on grass.

Vanessa Medlock, from Henryetta, was one of OSUIT’s bowlers. 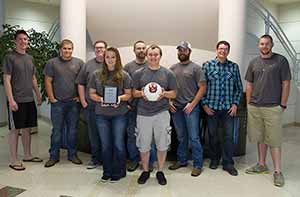 “It was strange at first,” Medlock said. “I’m pretty competitive. I got a strike.”

Civil engineering technology instructor Gayan Herath, the club’s faculty advisor, said the team had to look at the successes and mistakes of last year’s outing in order to learn and improve.

“I was super excited and felt so proud of our ASCE student chapter members. They earned this achievement in a very short time on their ASCE journey,” Herath said.

Garrett was on last year’s concrete bowling team and knew what needed to be done to improve this year.

“Last year we looked like the ugly ducklings. We didn’t know what was going on. This year we showed up and had a lot of support from all the schools,” he said. “We took the information from last year, and I think we scared some people.”

Herath said getting involved with competitions like concrete bowling or steel bridge building gives the students another opportunity for a hands-on application of their skills in a challenging environment.

“The most important benefit is the recognition of their abilities among other leading civil engineering programs around the country, as well as highlighting OSUIT in the civil engineering world,” Herath said. “Ultimately we are building their confidence.”