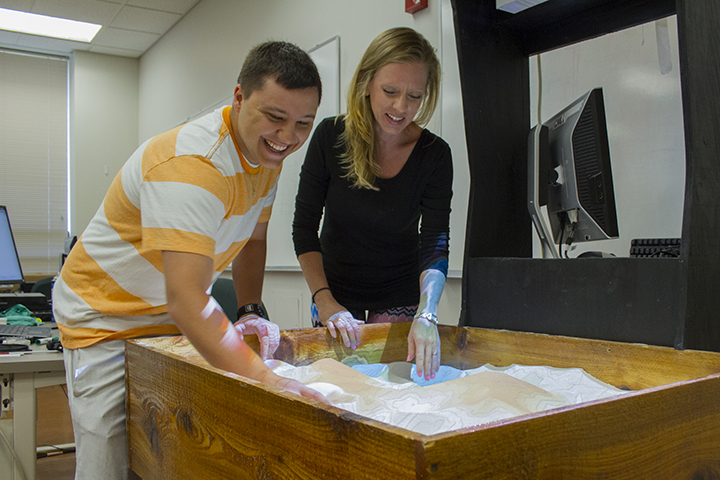 Faculty and students in OSUIT’s Civil Engineering Technologies (CET) program continue to lead the way when incorporating new and cutting edge technologies such as augmented reality and drones into the classroom to better train and prepare students for their careers in engineering and surveying.

Last fall, instructors Casey Campbell and Adrian Lee unveiled an augmented reality sandbox during Career Encounters, OSUIT’s largest student recruitment event. The sandbox uses a computer program to scan the surface of the sand and overlay a colorful topographic, or elevation, map on top of the sand’s surface in real time, which means as the sand is shifted and the surfaces changes, so does the map.

“Beginning students don’t know what a topographic map is. We can show different elevations to students who have never worked with topography before,” said Lee.

Using the three dimensional sandbox is the best way for students to learn what the lines of a two-dimensional topographic map represent, Campbell said.

“It enforces the 3D aspect. It can be easy to think those lines are just lines. The sandbox helps them see what’s really going on,” he said.

Kelley Whittaker, a student in the CET program, helped build the base for the sandbox, which has in turn helped her better understand the material.

“It’s not just lines on a map; it actually gives a real feel to it,” Whittaker said.

The sandbox, which was built from scratch by faculty and students, is primarily an educational tool used to teach about topography and hydrology, Lee said. Similar sandboxes are used practically in the military to determine the best courses for troop movements and supply routes.

Another new tool being utilized more and more in the field of surveying is drones.

Campbell said he had started to look into how drones could be used in the industry and found there were only a few people in the region who utilized this new technology. So Campbell, Lee and one of their students, Zach Bumanglag, all earned their drone pilot certifications within the last year so they could begin to learn how to use drones in the field.

“Traditionally, two people would have to go out and walk the area. You would have to traverse this whole area with survey equipment,” Campbell said. “With a drone, you can fly over and get a 3D picture with contouring. It’s so quick, it’s so fast and it’s safer.”

Bumanglag, who is working toward a Bachelor of Technology, said the drone is a very versatile tool for surveying. Using a computer program, the uploaded drone footage can be turned into topography maps, 3D renderings, and more almost instantly.

Having the drone skill set will also help him get a head start in his career.

“An engineering company, they don’t want to sacrifice the time to send someone out to learn how to fly and use a drone. They can’t afford to just let someone go just to learn this. They would rather just contract it out,” he said. “But if you already know how to do it, you’re a more valuable candidate for hire.”

Campbell said the drone technology is still pretty new, and he and other instructors are still figuring out what it can do and what it will mean to the industry. In fact, other programs and faculty have contacted the CET program to ask if they would offer workshops on using and getting certified to fly the drones.

“I would like to put some of the drone technology into the curriculum because it is the future,” he said.