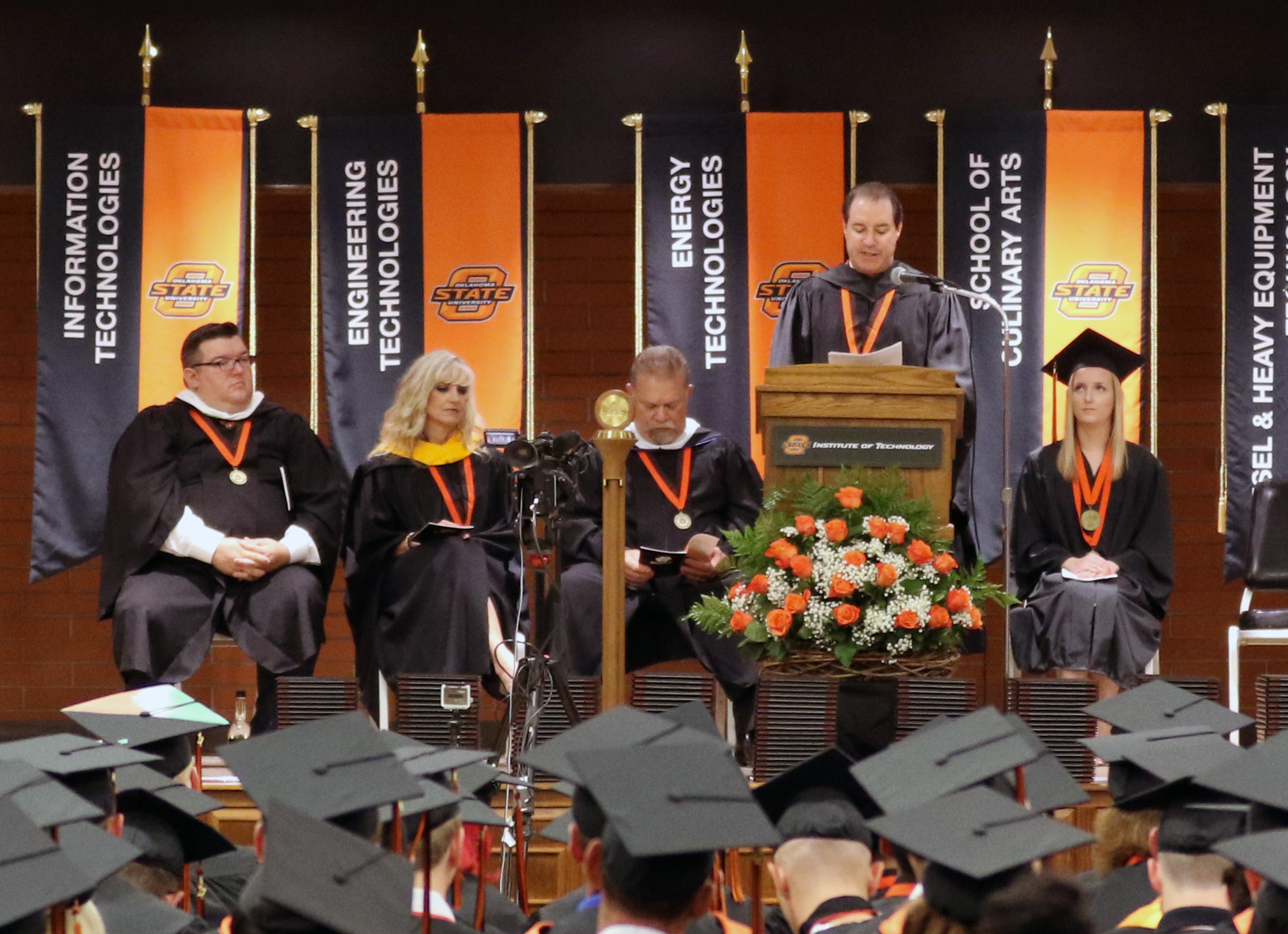 Pushing yourself and rising to your potential was a theme expressed throughout the two commencement ceremonies held Friday, Aug. 25, in Covelle Hall on the OSU Institute of Technology campus.

Mike Hayes, director of distributor development for Komatsu America Corp., addressed more than 300 OSUIT graduates, telling students in both ceremonies the story of how he came to learn about OSUIT and how he became a part of its mission of educating the future workforce two decades ago.

Working for Komatsu America Corp., the second-largest manufacturer and supplier of earth-moving equipment in the world, Hayes said he found the company had no structured training in place. Technical knowledge was learned on the job— not taught, and that the entire process from apprentice to journeyman took about five years to complete.

“This was the first area that I wanted to change. I wanted to make sure apprentices were taught with the latest technology, that they understood the importance of safety and personal protection. I wanted to make sure we improved on the GED or high school diploma, as these individuals would someday be running the departments they started out in,” he said.

Hayes presented the idea to management and they allowed him to start a pilot program.

“After several campus visits to different colleges, Komatsu found one that could deliver the results we were striving for. That school being right here at OSUIT,” he said.

But the 20-year partnership between Komatsu and OSUIT would never have happened if he hadn’t challenged himself and the company to do things differently.

“Be creative, be innovative and try new things. Just because something is done one way doesn’t mean it is the right way.”

Hayes addressed the 207th graduating class of OSUIT during two ceremonies Friday, one at 2 p.m., and another at 7 p.m. Of the 318 graduates, 195— or 61 percent— graduated with honors.

Lindsay McClain, who graduated with an Associate in Applied Science in Graphic Design from the School of Visual Communications, served as student respondent during the first ceremony Friday.

McClain’s path to OSUIT wasn’t a straight one. She first earned a bachelor’s degree in zoology from OSU Stillwater, but found her initial plan to become a veterinarian wasn’t what she really wanted.

“I felt most fulfilled when I was being creative,” she said.

“I knew that I wanted to pursue a creative career. After the campus tour I knew that OSUIT’s School of Visual Communications was the place that could make that happen,” McClain said. “The fact that I’m standing here giving this speech today is only further proof that it turned out to be one of the best decisions I’ve ever made.”

Miguel Martinez, who graduated from the School of Automotive Technologies with an Associate in Applied Science in Automotive Service Technology from the Toyota T-TEN program, spoke during the evening graduation ceremony.

He told his story of how growing up the oldest of three sons, his father pushed him to be better.

“He always pushed me to my very limit physically and sometimes emotionally. My goal was to make my family proud but most importantly to make my father proud because as many of you know, the first born in a family has the biggest responsibility,” he said.

“It always felt like my best was never good enough. I never understood why he was like that with me until I reached my teenage years,” Martinez said. “I realized he wasn’t doing that to punish me or make me feel bad or hurt me as his son. He wanted me to make sure I chose a different life that he did. To make sure I made the right choice to reach true success.”

Hayes told the graduates to be persistent, passionate and creative and to be the creator of change, not the reason for change.

“Whatever industry you represent whether it is construction technologies; culinary arts; engineering technologies; information technologies; watchmaking; automotive or diesel; find something that you’re passionate about,” he said. “Don’t be afraid of change, make fear your friend, be passionate and creative, and don’t let anyone else tell you ‘no it can’t be done’ when you know it can. And challenge yourself by asking ‘If not now, when?’”