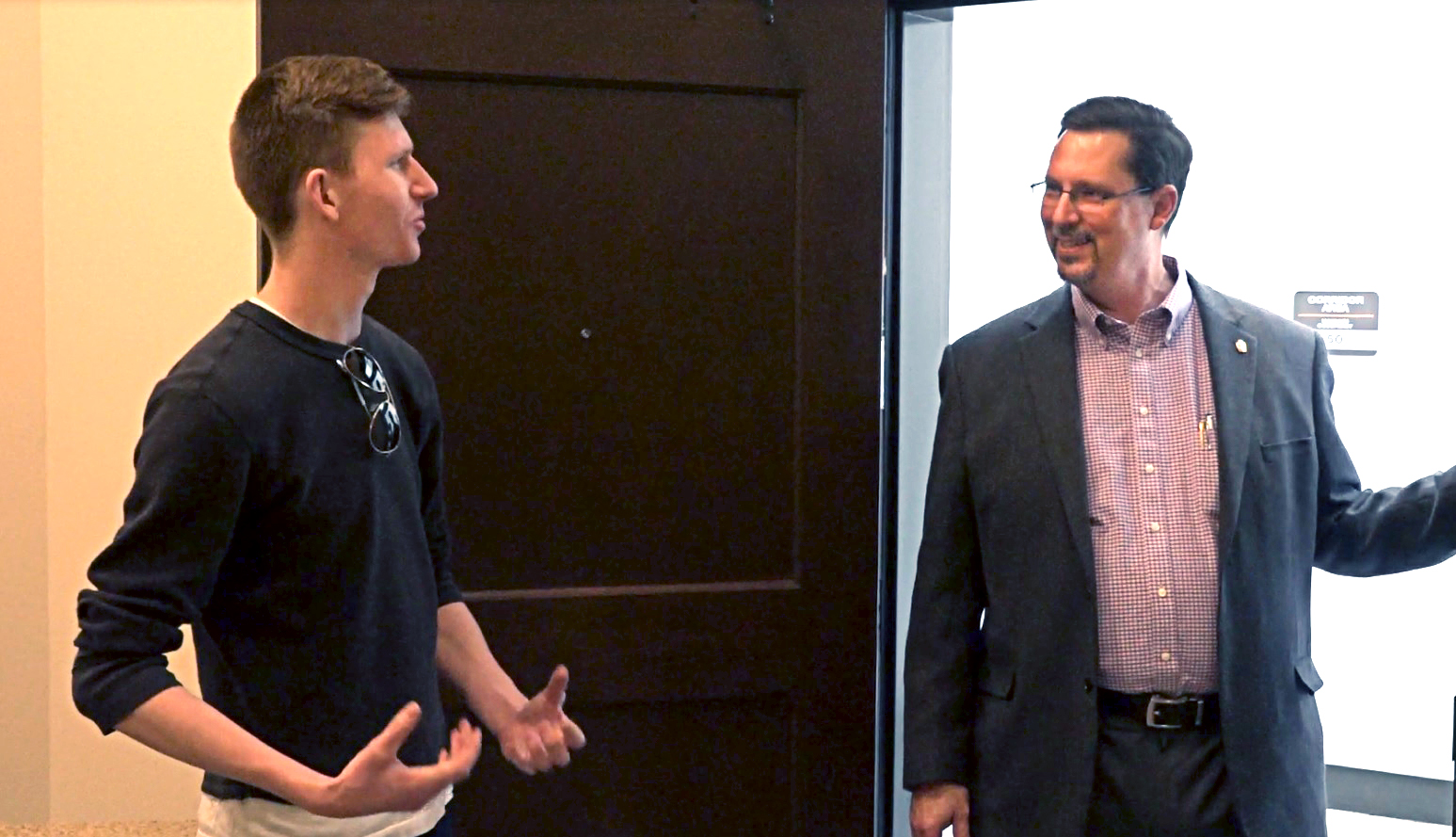 Wednesday was move-in day for OSUIT students, including those who will be the first to live in the GOPO.

Joshua Steel, a student in the Instrumentation Technology program, moved from one of the traditional residence halls on campus to one of the largest apartments in the GOPO.

“I’m pretty excited about it. You don’t get to be a part of a brand new building very often,” Steel said. “It was really well done. It was awesome of OSUIT to put the money into a historic building that might otherwise have been torn down.”

“It’s awesome. It’s like some New York City modern apartment,” Fisher said. “It’s all fresh, and everything is brand new.”

Each of the 38 units in the GOPO comes with a full kitchen complete with appliances as well as a height-adjustable bed in all 75 bedrooms in the building.

Power Plant Technology student T.J. Wilson lived on campus for a little over a year and said he can’t wait to really start the new semester in the more spacious apartment.

“I can’t even imagine what this is going to be like. It’s a lot more peaceful. You feel like you’re on your own,” Wilson said.

Bo Hudson, director of Residential Life, said he had a mix of emotions on move-in day.

“Excited, nervous, relieved. I’ve run the whole gamut,” Hudson said, as he watched the GOPO’s first 26 residents come by to check in, pick up keys and start to move in.

At capacity, the GOPO can house 75 students, and Hudson said he expects more students to apply to live in the newest student housing option as the semester goes on.

“This being the spring semester, we knew we probably wouldn’t fill it up like we would in the fall semester,” which was fine with him, Hudson said, because it allows any last-minute kinks to be worked out or fixed while affecting fewer students.

The GOPO will only house students 21 years and older, and it is that sense of independence that was a big draw for many who applied to move into the downtown building.

“I like the more mature atmosphere and it’s downtown with places to hang out,” Fisher said. “I cook and I didn’t want to have to buy the meal plan.”

The kitchen was a draw for Wilson and Steel as well.

“All I got for Christmas was dish sets and pots and pans,” Steel said. “I’m going to be able to cook my own food.”

In addition to parents and friends helping the new residents move in, members of the community came out to volunteer.

“It’s something we’ve been looking forward to for a long time. A year ago we were talking about what we could do to make the students feel welcome,” said Richard Larabee, president of the Okmulgee Main Street Board.

Representatives from the Chamber of Commerce, Okmulgee Main Street as well as local churches and surrounding business all volunteered their time to help students move in. It’s just the latest example of the Okmulgee community and the OSUIT community working together, Larabee said.

“Having the students downtown is going to go such a long way in bringing together what was once so separate,” he said. “Hopefully downtown will start to be synonymous with OSUIT.”

Hudson said having volunteers from the community come out on move-in day shows the students that they aren’t an island in downtown, but a part of Okmulgee as well as OSUIT.

“We want to support each other and help each other. It’s helped show the university and the town coming together,” he said.

Support didn’t stop with moving help. Three banks in Okmulgee each offered a free meal to the new residents. Mabrey Bank sponsored a free lunch on Wednesday for residents and volunteers, Arvest Bank provided breakfast on Thursday; and First Family Credit Union is bringing in lunch on Friday.

“We are so glad they are moving to downtown Okmulgee,” said Rusty Milroy, vice president of lending at Mabrey Bank, who also coordinated the free barbecue lunch on Wednesday. “We wanted to be a good neighbor. We knew they would be needing a break and looking for something to eat for lunch.”

Mabrey Bank is located right across 5th Street from the GOPO, and Milroy said he’s loved seeing the progress of the building every day.

“Every morning I would pull in to see what they’d done overnight,” he said. “The best is now seeing the lights on in the building in the evening. That means there’s life there now. People are living in downtown.”