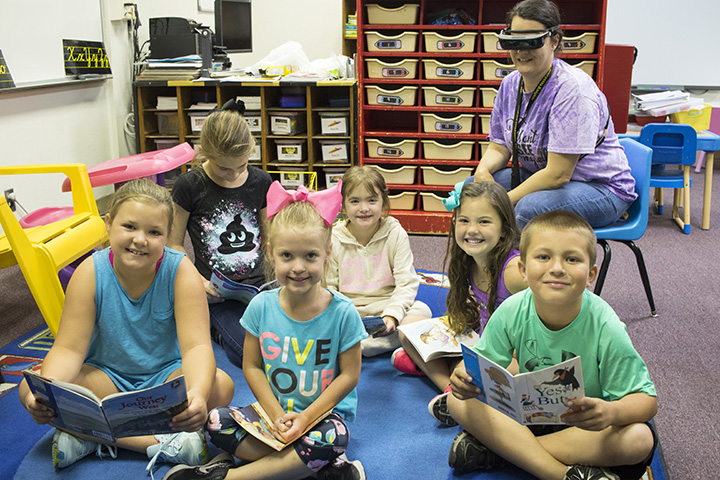 At 37 years old, Jill Porter eagerly anticipates finally seeing a butterfly with her own eyes.

“I haven’t seen one yet, but we’re going to go to Branson’s Butterfly Palace soon,” said Porter.

Porter, an alumna of OSU Institute of Technology, was born with optic nerve hypoplasia, a condition that only allows her to see clearly a few inches from her eyes, so she is legally blind.

Most of her life, she’s seen the world primarily as a colorful moving blur. That is until about a month ago when she received a special pair of glasses that allow her to have 20/20 vision.

“It’s amazing. I was seeing things my sister and mom couldn’t even see or didn’t even notice,” she said. “Being able to see across the street was really weird.”

Porter and her family first learned of the glasses on a news story that aired earlier this year about a young girl from Muskogee with the same visual impairment as Porter who was able to see because of these glasses called eSight.

The glasses, which look like a smaller version of a virtual reality headset, have a camera on the front that then projects that image to two tiny screens right in front of the wearer’s eyes. The glasses are battery powered and can stay charged about four to six hours. A pair of eSight glasses costs about $10,000.

“My sister spearheaded the fundraising. We had spaghetti dinners and sold T-shirts,” said Porter, who grew up in Morris but moved to Henryetta three years ago to be closer to her family. “I’m amazed. People I didn’t know donated money so I could get these glasses. The Henryetta community, they really have that community spirit of ‘we’re here to help each other.’”

In the past, Porter has utilized a service dog as well as friends and family to help her get around new places, but typically she is able to learn and then maneuver through environments she encounters regularly without many issues.

Porter graduated from OSUIT in 2003 with two associate in science degrees, one in Pre-Education and another in Business.

“I loved it. Danna Martin, one of my instructors, she was amazing. On Fridays she would read my chapter to me,” she said. “I had a bunch of amazing teachers.”

Martin, who retired from OSUIT earlier this year, said she remembers Porter well from her developmental psychology course.

“She was an A student who always attended and participated and had a sense of humor,” she said. “She was super bright, and I felt she would do well.”

Even though she was the teacher, Martin said she learned from Porter.

“She made me realize what a visual teacher I was. I realized I was missing the mark with her,” she said. “Early on, I learned it would benefit her if we got together one-on-one on Fridays. I would read her passages. I also branched out to do more group work and discussions in class.”

Martin said Porter was also well-known and well-liked during her time on campus.

“She brings out the best in people,” she said.

Porter said she started a disability awareness day on the OSUIT campus when she was a student and just tried to have a fun and productive time at college.

“I tried to make friends with everyone young and old,” she said.

After graduating from OSUIT, Porter earned a bachelor’s degree in rehabilitation therapy from East Central University. She then moved to Pittsburgh and taught computer classes for three years at the Western Pennsylvania School for Blind Children.

She moved back to Oklahoma in 2009 and now volunteers as a reading tutor at Henryetta Elementary School.

“I love volunteering, I love working with the kids. The staff treat me just like one of the regular staff,” she said. “I tutor kids who are having difficulty reading. We can work more one-on-one. I had trouble reading when I was kid so I can relate to them on that level.”

Right now, Porter is still adjusting to the eSight glasses and working with her optometrist to get just the right fit for her. And she has homework.

“The glasses came with a textbook with different exercises to do in them like go shopping and go to the movies. We just went to the aquarium,” said Porter, and soon she’ll add butterflies to the list of things she’s been amazed to see.

“The leaves, the bark of trees, the grass. People’s faces, the changes in facial expressions,” she said. “It’s amazing because I can see the kids now. I can look at their books.”

Tags
Business - Pre-Education
Back to Top
©