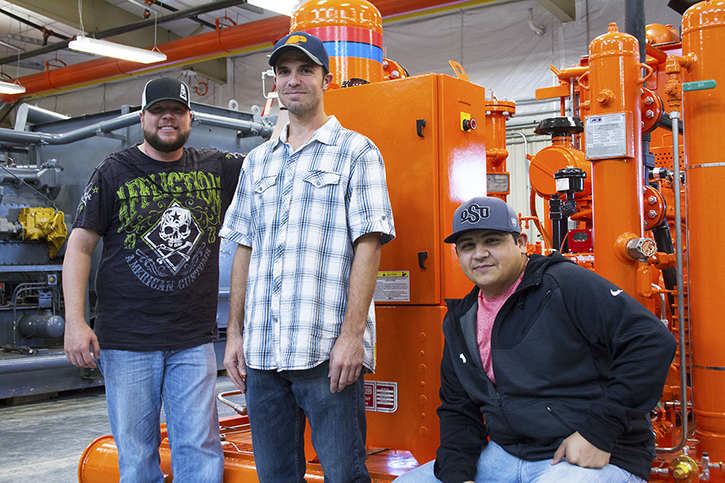 Natural Gas Compression students Ronnie Cheshier, Jonah Hulbutta and T.J. Potter recently had the opportunity to learn more about the energy industry at a gas compressor conference thanks to scholarships from the Engineering and Geosciences program at the University of Oklahoma.

The three each received a $1,000 scholarship to cover registration, lodging and travel expenses to the Gas Compressor Short Course Conference held Sept. 16 through 18 in Norman.

The conference offered seven courses to choose from, each lasting two and a half days, and all three said it was tough deciding which course to take.

“Leading up to it, we were torn between two or three courses,” Hulbutta said. “We kept asking our instructors which ones they thought would be good to take and they were having the same problem we were.”

Potter and Hulbutta, who are in their second year at OSUIT, attended the course on operation and maintenance of high-speed compressors while Cheshier, who is in his first year, chose to attend the one on engine emission optimization.

“I learned a lot in those two and half days, talking with those instructors who are still out there in the field on a daily basis,” Potter said. “It’s good knowledge to have. It took what we’re being taught here and went a little more in-depth.”

In addition to what the three learned in their courses, the conference also gave them a chance to network with leaders and companies in the natural gas compression industry.

“You’re getting out there and interacting with people and getting to know different companies,” Cheshier said.

The experience and contacts they made is worth more than the dollar amount of the scholarship, said Hulbutta, who will graduate in August 2015.

“It was about really getting out and representing the school and getting our faces out there,” he said. “We shook a lot of hands.”

This conference, as well as their internships, also gave them the opportunity to see just how important OSUIT’s Natural Gas Compression program is to the industry.

“At that conference, the number of alumni we met was unbelievable,” Hulbutta said. “Everybody knows everybody.”

Potter said there’s camaraderie among companies in the energy industry so the more people you meet and have a connection with, the better.

“I’ve met a lot of people who have gone through the OSUIT program. It’s a small world when you get into the oil and gas field,” he said, and he hopes to give back to his alma mater and the industry after he graduates next summer. “I’d like to come back to OSUIT and stay connected and help the new guys coming through the program.”