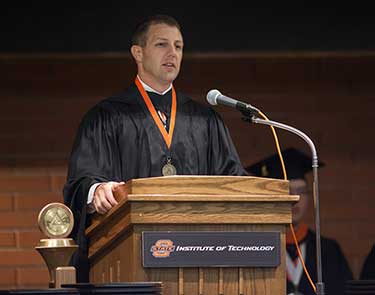 OSUIT President Dr. Bill R. Path introduced Congressman Mullin, explaining to the soon-to-be graduates that Mullin is not very far removed from graduating from OSUIT himself.

“Three years ago, graduates, he was sitting right where you are, and now he holds a congressional seat in Washington D.C.,” Path said to the crowd before Mullin spoke.

Mullin talked about how the graduates should attempt to step out of their comfort zone, take risks, make and learn from their mistakes.

“The temptation to quit will always present itself, but giving up only leads to regrets,” Mullin said. “Don’t be the one that says, ‘I wish I would have.’ The only difference between a ‘wish’ and a ‘do’ is the dedicated action between. You are the only person who can stand in your own way of accomplishing something.”

Mullin was elected in November 2012 to the U.S. House of Representatives to serve Oklahoma’s 2nd Congressional District. When Congress convened in January 2013, Mullin, who is a citizen of the Cherokee Nation, became the second Native American U.S. Representative, joining fellow Oklahoman Rep. Tom Cole. Mullin serves on the House Transportation and Infrastructure Committee and the Natural Resources Committee. Mullin was raised in Oklahoma, and he still runs several businesses in the state.

Tags
Alumni - Graduation
Back to Top
©