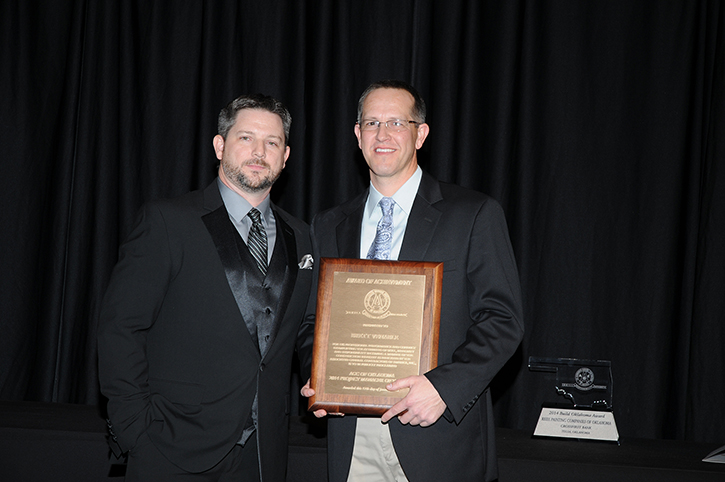 The Oklahoma chapter of the Association of General Contractors recently recognized several of their members during an awards banquet, including two OSU Institute of Technology alumni and a longtime Construction Management advisory committee member.

Danny Hancock, who graduated from OSUIT in 1993, is now serving his one-year term as president of AGC of Oklahoma. The organization has about 220 business members representing 2,500 to 3,000 employees in the construction industry.

Both Hancock and Venable, who attended vocational technology programs while in high school, said scholarships led them to OSUIT’s School of Construction Technologies.

“It was an experience,” Hancock said of his time at OSUIT. “Everybody there— the instructors, the administrators, the financial aid officers— were always helpful.”

“It gave me a good overview of the processes utilized for building and managing large commercial projects as well as learning in a hands-on environment,” he said. “For myself personally, my experience and degree from OSUIT totally changed my career path. Prior to receiving my scholarship, my plans were to work in the residential market.”

Hancock, who is now construction manager at Cowen Construction, had a similar sentiment.

“I wouldn’t be where I’m at now if not for OSUIT. If I had gone right from high school to work, no question I would still be in the field,” he said. 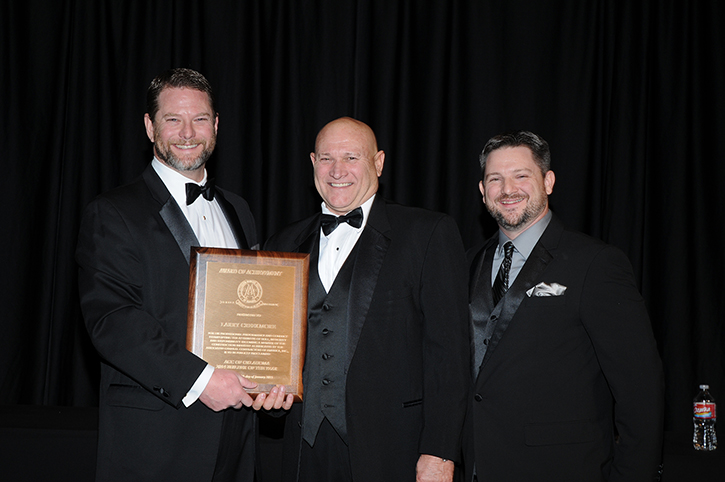 Creekmore’s association with OSUIT came about after he was approached in 1992 by academic chair Steve Olmstead to join Construction Management’s advisory committee comprised of professionals from the industry that advise administrators and instructors on curriculum and equipment needs so students are better trained and prepared for the workforce.

“I’ve been on the committee ever since,” he said. “I enjoy the interaction with the young people and seeing them come up in the industry.”

The role of advisory committees is very important to the success of OSUIT’s programs and the industries they serve.

“That’s a big advantage to the students and the industry. We talk about trends happening in the field or the procedures, tools and equipment that we may need to change,” said Creekmore, who has been in the construction industry for 37 years and is now executive vice president of Cherokee Builders Inc.

He also served on the AGC of Oklahoma board of directors for 12 years and is past president of the organization.

“The award for Builder of the Year, it’s like a career achievement award recognizing how long you’ve been in the industry and your impact,” he said. “I’ve seen a lot of things change in the industry. Things like GPS, the internet and cell phones have all really helped and improved our communication.”

Venable said he was surprised and humbled to learn he had been named Project Manager of the Year.

“It means a great deal to be nominated by your peers and voted by all the people you work with day in and day out. It’s a very reassuring feeling that people enjoy working with you and think highly enough of you to nominate you for an individual award,” he said.

As president of AGC of Oklahoma, Hancock said he’s the face and voice of the construction industry in the state.

“This is really a big brotherhood and fraternity,” he said, and everyone recognizes the importance of giving back and helping the next generation entering the workforce. “You’ll pass by a student at one of our functions and they may be your employee in two years. When I received a scholarship from AGC in 1992, the person who handed me the check was AGC vice president John Cowen, who is now my boss.”

Having OSUIT alums Venable and Hancock recognized by their industry was satisfying to Creekmore, who has served as an advisor for the program for more than two decades.

“I take a lot of pride in that, in seeing these guys succeed,” he said. “It’s not surprising at all that these graduates have elevated themselves to that level.”

While getting the award was unexpected, Venable said graduates of the School of Construction Technologies being recognized isn’t a surprise.

“OSUIT has always provided the industry strong support by being involved with and listening to the needs of the industry. Likewise, the industry supports OSUIT,” he said. “OSUIT continues to recruit individuals with experience and backgrounds in the trades and give them the tools to build on their experience providing them with an opportunity to further their careers in the industry.”