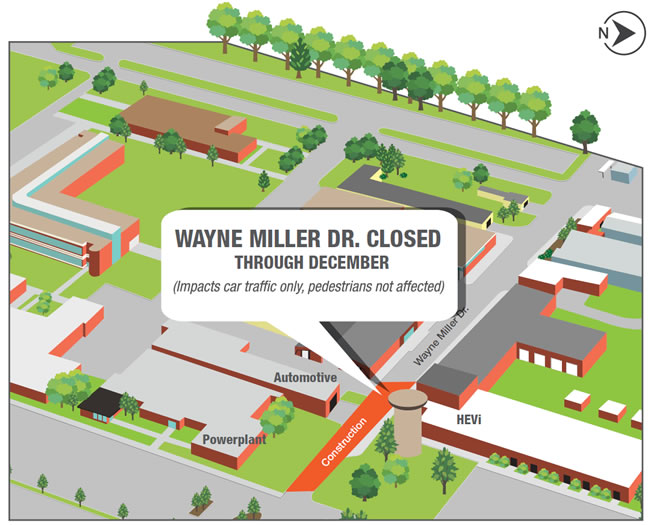 Beginning the weekend after Thanksgiving, a portion of Wayne Miller Drive near the Tech Tower will be closed in order to remove an underground fuel tank.

Removal of the 7,000-gallon tank will close less than a block of the road just in front of the Heavy Equipment and Vehicle Institute building and Tech Tower, said Mark Pitcher, physical plant services director.

The HEVi and Automotive buildings can still be accessed on Miller Drive coming from the west side of campus, Pitcher said, and the project should have little or no affect on operations at any of the buildings.

“There’s a water line and gas line near the tank so we may have to shut off utilities during the actual removal, but it would only be for a few hours and just affect the HEVi building,” he said. “We all know they’re tough over there and can handle it.”

The tank was originally constructed and buried when the campus was a military hospital in the early 1940s.

“It needed to go,” Pitcher said, and his staff has been working with the Oklahoma Commerce Commission for about a year on the removal.

Since it is a fuel tank, a licensed contractor will be working on the project.

“It looks to be a routine removal,” he said. “The tank has been in the ground a long time. Once it’s out, we’ll determine if remediation is required.”

The project could take from two weeks to a month to complete depending on the condition of the tank.