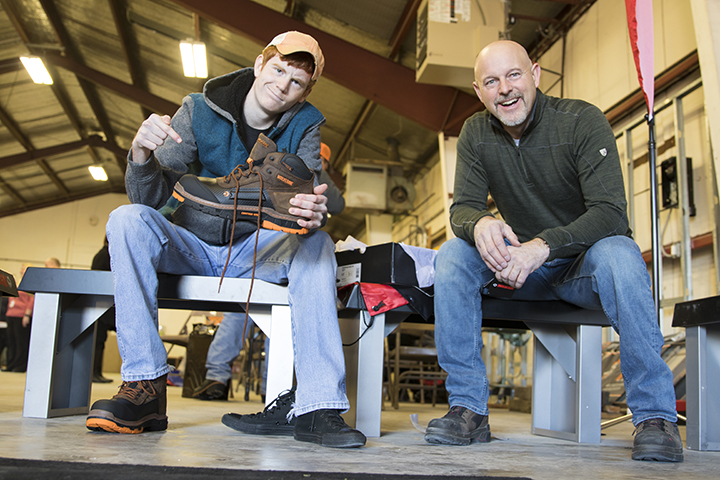 Students in OSU Institute of Technology’s School of Construction Technologies looked like kids in a candy store when footwear company Wolverine took over a lab space on campus earlier this month to give every student in the school a free pair of work boots.

The boot giveaway on Dec. 6 was part of Project Bootstrap, an initiative started by Wolverine in partnership with the mikeroweWORKS Foundation.

Michael Boss, marketing specialist with Wolverine, said the goal of Project Bootstrap is to give away 2,000 pairs of work boots to students at trade schools and technical colleges across the country.

“This past year we really tried to tackle the skills gap, and this project is our way to meet students going into trade careers,” Boss said. “It’s our way of thanking them for getting into the trade careers when it’s not always seen as a first option.”

Representatives from Wolverine as well as Academy Sports & Outdoors, one of Wolverine’s largest retail partners in Oklahoma, gave away close to 300 pairs of work boots to students and faculty in the School of Construction Technologies.

OSUIT was the second campus Wolverine visited as part of Project Bootstrap. Darren Woodard, an instructor in the Construction Management program, said Wolverine contacted OSUIT about the opportunity to take part in the project a few months ago.

“A new pair of work boots is $100 to $150, and if you’re in construction, you have to wear boots to even get on the job,” Woodard said. “Wolverine is a national brand. I worked my way through college as a plumber, and I wore Wolverine boots.”

Lexi Powers, a student in the Construction Management program, said she plans on saving her new work boots for when she starts working at a concrete company after graduation.

“It’s really cool, Wolverine giving us these boots. It’s a good idea and a way to build their brand and get loyal customers,” Powers said. “The boots feel really good. I was surprised they had women’s sizes.”

Wolverine brought three kinds of boots to OSUIT— one style for women, one style for men and a more specialized boot for those students in the High Voltage Lineman program.

Austin Hope is one of those High Voltage students who got the more specialized boots that can better withstand the rigors of standing on gaffs, or hooks, that get attached to the foot when climbing power poles.

“Your boots get torn up and worn out pretty quickly,” Hope said, so getting new quality work boots is a relief on his wallet. “You’re looking at $250 to $300 for a pair. Wolverine giving us a pair helps out a lot financially.”

Tags
Construction Management
Back to Top
©