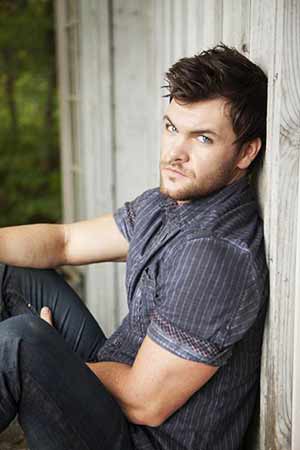 Headlining this year’s Super Saturday festival is rising country music star Dylan Scott, who has taken his life growing up in Louisiana and put it to song.

The free concert, presented by Tulsa radio station 106.1 The Twister, is slated for 3 p.m., April 12 during Super Saturday, an Okmulgee community homecoming event hosted on the campus of OSU Institute of Technology.

Now the multi-talented Sidewalk Records Artist is poised to become a major star with his new self-titled CD “Dylan Scott” featuring five modern, progressive songs he co-wrote with the best of Nashville’s new generation of songwriters. The CD, produced by Music City legend, Jim Ed Norman, is self-named for more than the obvious reasons.

“It says everything about me, honestly,” said the 22-year-old Scott. “There’s not a song on there that doesn’t relate to who I am.”

His song “Turn Rows” a perfect example of spirited rural fun and youthful enterprise in the cornfields. Or “Grandaddy’s Gun,” which captures the rite of passage for a boy who grows-up bonding with the men who teach him the ways of the woods.

“There’s a spiritual quality to hunting,” said Scott, an avid outdoorsman, talking about his favorite pastime. “I usually sit in the stand by myself. It’s nice and quiet. You don’t hear anything but wind and birds. You watch the sun come up. It’s a peaceful thing.”

Almost everything in his life has been a natural fit, starting with the music itself. If he sings about it he’s done it, and you might say it’s in his blood.

His father, Scotty, played guitar and sang harmony in the ‘70’s and ‘80’s with country artists, Freddy Fender and Freddy Hart.

Scott’s great aunt Marie Jarvis played piano with the Southern gospel group the Melody Boys and taught piano at the Stamps Baxter School Of Music. She would sit Scott on her lap when he was 2 years old and teach him the rudiments of the keyboard.

Scott’s cousin, Linda Robinson Sholar, played for the Speer Family, the Downings, the Higher Ground and briefly with the Stamps Quartet, which backed Elvis Presley. She also taught piano to the famed piano man, producer and record executive Tony Brown, who played with both J.D. Summers and the Stamps as well as having production credits for George Strait and Reba McEntire.

It was around 2 years old that Scott’s father noticed the toddler could sing on key. In the next few years, almost everybody commented on his voice.

“Ever since I was real young people said ‘You have a deep voice to be so little.’ Since my dad was in the business, I thought, ‘Oh, everybody’s in the music business. That’s what I’ve got to do when I get older,’” he said.

By the age of 12, Scott was proficient on acoustic guitar and dreaming of a future on stage. By his high school, he was performing with the gospel trio, 11th Hour, traveling throughout the South to appear at fairs, festivals and churches. But he also excelled at basketball and found himself torn between the lure of the hoops and the high-whine of a pedal steel guitar.

It was old-school country legends Merle Haggard and George Strait that really caught his ear and he heard something special in the plaintive sounds of Keith Whitley, who died the year before Scott was born.

“Keith was my musical role model. Talking about him is like talking about Elvis to me. I love how smooth his voice was,” he said.

He dreamed of moving to Nashville to become the next Keith Whitley and carry the banner for pure honky-tonk while he honed his chops at high profile shows around the state, including the renowned Louisiana Hayride.

But when Scott arrived in Nashville and began writing more and more, fueling his absolute passion for songwriting, his style broadened into an edgier sound. From the sexy groove of “Mmm, Mmm, Mmm” to the get-the-party-started punch of “Twangin,” Scott’s original songs have proven undeniably infectious.

His ballads as well show a mature songwriter whose work is likely to be recorded by other artists. “Good Town,” for example, resonates with anyone who is proud of the place that made him who he is.

Scott’s own hometown, Bastrop, near Monroe, La., is where he returns to his family when he’s not in Nashville or on the road. There he worked construction and became a part-time fitness trainer before scoring his record deal at age 19.

“It was great growing up in Louisiana, twenty minutes to the nearest anything, and being able to walk outside and jump on a four-wheeler and go riding wherever you wanted on a back road,” he said.

Scott’s signature style launched with the debut single, “Makin’ This Boy Go Crazy,” which started playing on country radio last year. Co-written by Scott, the track’s melody rolls through that perfect southern-girl relationship that he proclaims drives his own life.

“The song represents a lot of who I am,” he said. “When I’m in a relationship, I give my all to it.”

Because of his low baritone, Scott knows some people will put him in the same vocal category as Josh Turner or Chris Young. But if he has to be compared to anyone in the business, he says, he hopes it’s for his character.

“I just want to be a class-act, a good guy, and the man my dad raised, with a great work ethic, a strong sense of responsibility, and a love of making music that goes right down to my toes.”

Join the festivities on April 12. Super Saturday is an Okmulgee tradition hosted on the campus. It’s a community homecoming celebration and alumni reunion, combined with fun-filled activities for the entire family. The event is free and open to the public.