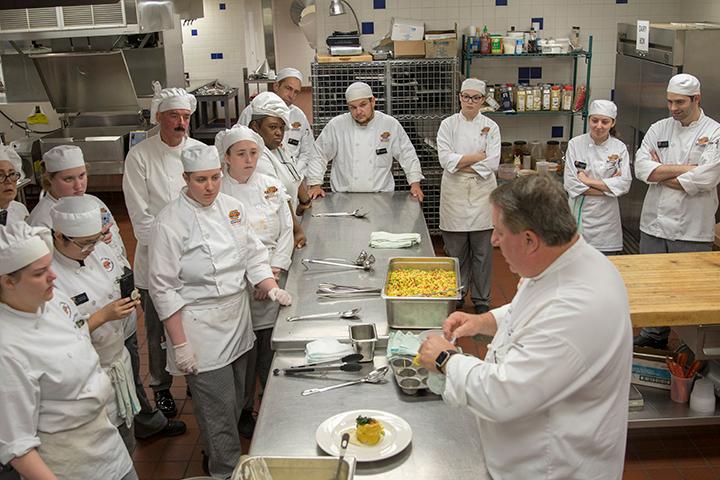 On Tuesday, the School of Culinary Arts hosted the final Cowboy Chef’s Table of the luncheon series’ inaugural year.

The first year of the Cowboy Chef’s Table series invited six guest chefs to create a lunch menu and then work directly with Culinary Arts students to prepare their menu’s dishes. The guest chefs would do a live cooking demonstration of that day’s meal and talk about their culinary style to luncheon patrons.

The series’ goal was to raise money for student scholarships, and Culinary Arts Dean Gene Leiterman said this first Cowboy Chef’s Table series raised about $16,000 with close to $13,000 going directly into the scholarship fund.

“It’s beyond my expectations,” Leiterman said. “That was the whole goal, to raise money for scholarships, and that number far exceeded what we were expecting.”

“We have had a wonderful group of chefs over the last year share their culinary point of view and create some amazing dishes with the students,” Leiterman said. “Our students have worked with the industry’s best chefs and had valuable experiences with them.”

Leiterman said the chefs, who work in a variety of professions in the culinary industry, presented an array of dishes and cuisine that showcased their different styles.

“We have eaten everything from beef cheeks to poke tuna to chicken and farro,” he said, and that goal of diversity will continue into the next Cowboy Chef’s Table luncheon series that begins in the fall. “Next academic year, we plan to bring a diverse group of chefs and create even more experiences for students and guests.”

The format will change with four luncheons planned with two guests chefs presenting at each event.

“We’ll have different classic American dishes at each luncheon, and what we want is for the chefs to create their version of that dish in their style, their culinary point of view,” Leiterman said. “Cowboy Chef’s Table has momentum of its own, and the series will continue to evolve. Let’s do things that are fresh and new.”