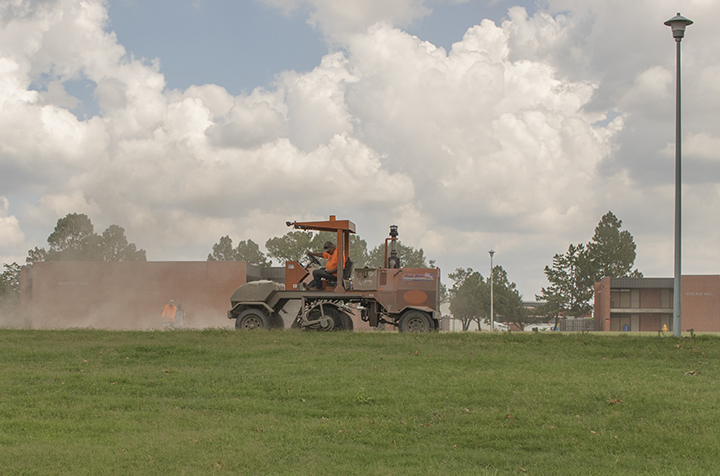 A resurfacing and resealing project across the OSU Institute of Technology campus began over the summer break and will continue through August.

Physical Plant staff reviewed driving surfaces with cracks, potholes and other issues and determined there were 11 parking lots and roadways that were in need of re-pavement.

The areas throughout campus will be dug out and then repaired and repaved, with the priority being the original parking lot at the Miller-Kamm residence hall.

“We were having issues with it. We had a lot of patches on the Miller-Kamm parking lot,” said Grounds Supervisor Allen York. “Now it’s going to be one flush, level surface.”

Mark Pitcher, Physical Plant director, said sub-base issues were discovered while demolition on the old parking lot began, so the repaving portion of the project is on hold while crews determine the next steps at Miller-Kamm.

“That part is delayed a little bit. We’re committed to getting this part right before we move on,” Pitcher said.

The repaving portion of the project will take several weeks with the goal of completing the project by mid-August.

“We appreciate everyone’s patience,” he said. “It’s been a rough couple weeks, but it’s getting better.”

Many other parking areas have already been resurfaced with sealant and will be striped Friday and Saturday.

“We had three different sizes of spaces, anywhere from 8-feet to 11-feet,” he said. “Now they’ll be standard size.”


York said asphalt is supposed to be resealed every five to seven years.

“They haven’t been resealed in the 17 years I’ve been here,” York said. “It extends the life of the asphalt. It’s long overdue.”