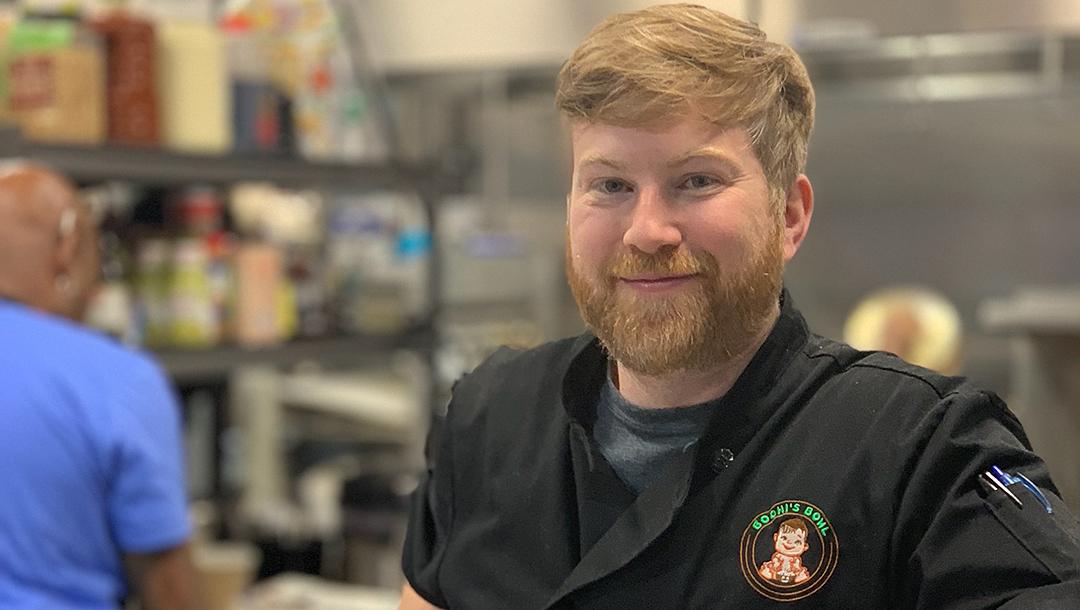 OSU Institute of Technology alumnus James Wegner is the owner of Bodhi’s Bowl, a restaurant located in the Mother Road Market on Route 66 in Tulsa.

Bodhi’s Bowl, named after his son, Bodhi, who was born two days after graduating from OSUIT, is a fast-casual, gourmet restaurant that serves international rice bowls. With a menu that spans the globe from India, Thailand, Mexico, Egypt and beyond, Wegner tests what can be done with a bowl of rice.

In addition to the rice bowls, they serve a Canadian delicacy, poutine and also have an award-winning macaroni and cheese on the menu.

“We’re having a lot of fun and putting out some great eats,” said Wegner.

Wegner graduated from OSUIT with an Associate in Applied Science from the Culinary Arts program in the Fall of 2016.

A native Canadian, Wegner found himself transplanted in Oklahoma in 2014 after following his wife for work. He was looking to make a career change and wanted to one day own his own restaurant.

“I was a trained meteorologist in Canada for five years working with Environment Canada,” said Wegner. “When I say it was the best choice I’ve made in the last five years, I mean it.”

Wegner had originally planned to attend another culinary school in Oklahoma when his wife encouraged him to give OSUIT a chance.

“I had all of the paperwork filled out and ready to go to another school, I never thought I would be willing to drive from Tulsa to Okmulgee for two years,” said Wegner. “When I got there, I saw a beautiful, well-organized kitchen environment and it sold me on the extra distance.”

Wegner said his education at OSUIT was invaluable. He said he learned a tremendous amount and now employs several fellow classmates that he met while in the program.

“It was through one of the chefs at OSUIT that I got my first job in the industry,” said Wegner. “That job ended up opening several doors for me over the years.”

Wegner began his restaurant concept at Kitchen66, a nonprofit organization that acts as a business incubator and business ownership training group.

“It was through them I got my concept off the ground and through the Lobeck Taylor Family Foundation that I got the opportunity at Mother Road Market,” said Wegner.

As the restaurant owner, he is able to put his education to work. He manages employees, food purchases, menu creation, hiring, human relations, training, day-to-day running of a restaurant, advertising and budgeting.

“I have several amazing memories from my time at OSUIT,” said Wegner. “It was the best choice I’ve made since I moved to Tulsa.”