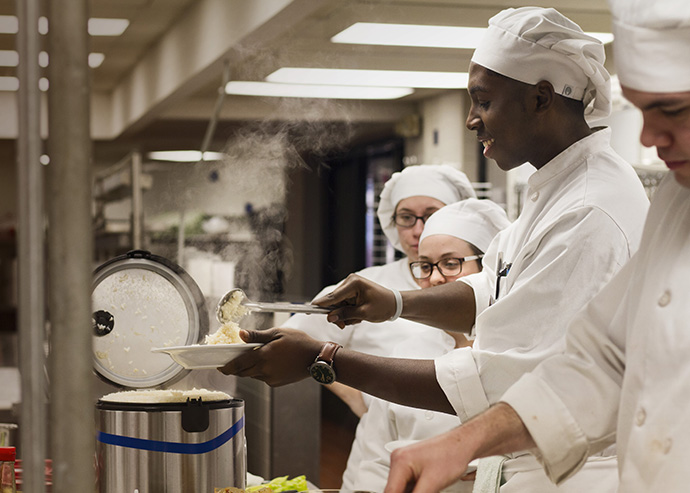 The School of Culinary Arts at OSU Institute of Technology is looking for supporters who want to help students get some real-world restaurant experience through a fundraiser for a pop-up restaurant on campus.

The project, now posted on the OSU Foundation’s crowd-sourcing website PhilanthroPete, has the goal of raising $2,500 that students will use to transform the Tech Room in the Culinary building into a pop-up restaurant for one week in December.

Gene Leiterman, dean of the School of Culinary Arts, said the fundraising project is aimed at small donors who can give anything from $10 to $250.

“It gives them a pretty immediate return on their investment,” Leiterman said. “They can say ‘What I invested actually did something.’”

The five donor levels come with perks that begin with being listed on the menu, and then each level after that includes free menu items during the pop-up restaurant’s run with the highest level including a complete dinner for two at the chef’s table.

The pop-up restaurant will be open Dec. 11 through 14 from 6 to 9 p.m. The project is part of the Contemporary American Restaurant course with the students in that class spearheading the restaurant.

“They’ll have two weeks to recreate or repurpose the Tech Room into their restaurant,” Leiterman said, and that includes everything from purchasing dishware and flatware; printing menus; painting walls and buying décor; and even hiring other students to work in the restaurant.

“A lot of students say they want to open their own restaurant,” he said, so this is an opportunity for students to do just that. “They’re going to have to come up with a pitch and pitch their ideas to me. They have to decide who will do what. Who will be general manager, who will handle front of house, they’ll need a kitchen manager, head chef. I’m really hoping it involves the whole school.”

For more on the OSUIT School of Culinary Arts pop-up restaurant or to donate, go to philanthropete.osugiving.com/cowboychef.