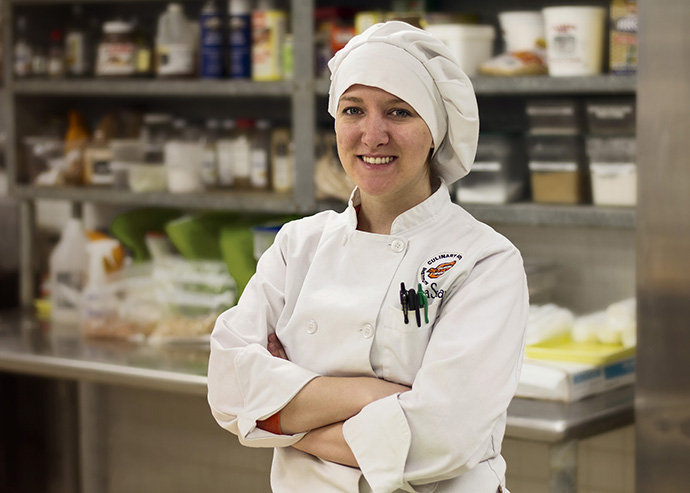 Rebecca Smay may be nearing the end of her time as a student in OSU Institute of Technology’s School of Culinary Arts, but she already knows what it’s like to feed thousands.

Before she was a student, she was a food service specialist in the U.S. Army for two years. When she returned to Oklahoma, she worked in the bakery of the Student Union on the OSU campus in Stillwater.

“I really liked it and decided I needed to go to school,” Smay said. “I’m a single mom so OSUIT’s program suits me. My daughter can go to daycare while I go to classes.”

Smay, who is from Drumright, recently was selected as the winner of the Brandon Thrash & Valarie Carter Fine Dining Scholarship, a scholarship competition that tasks culinary students to create their own recipe.

Her winning recipe was for roasted tomato and basil baked chicken with a Moscato Bechamel sauce and includes two side dishes, lemon buttered asparagus and tomato risotto.

“I just sat down and thought about what sounded good. I eat chicken a lot, and it was the first thing that came to mind,” she said. “It was challenging because I had never done it before.”

Smay said it took her several weeks to develop the recipe, tweaking and adjusting as she went along.

“They submit the recipes and we go through them, and we ask them to cook elements of their recipes,” Ware said. “They have to come up with it, and it can be a recipe for anything.”

Ware said even being asked to participate in the scholarship competition is rare.

“It’s not available to everybody. We had three submitted recipes this year,” he said.

“I went crazy, I was shocked really,” Smay said when she learned she had won. “I’ve never been chosen for anything like this before.”

Having that scholarship takes some of the hardship off her shoulders, she said.

“It releases some financial burden. It doesn’t cover everything, but it does help,” Smay said, especially when she starts her internship next semester at a hotel restaurant in Pleinfeld, Germany.

She’ll also have support from her sister, who lives just 10 minutes from the restaurant where she’s completing her internship.

“It’s not so much about specializing in German cuisine, but I want to gather more experience and learn the techniques they use there,” she said.

After she graduates from OSUIT in August, she plans to go to Stillwater to begin working toward a bachelor’s degree from OSU’s School of Hotel and Restaurant Administration.

Salt and pepper as needed

Salt and pepper as needed

1. Preheat a convection oven to 350 degrees. Line a half sheet pan with foil. Julienne two whole slices from the tomato. Salt and pepper the chicken and place it on sheet pan. Sprinkle basil on the chicken to liking and place the two pieces of tomatoes on top of the chicken. Place in oven for 30min.

2. In a medium saucepan, heat the butter over medium to low heat until melted. Add the flour and stir until smooth. Over medium heat, cook until the mixture turns a light, golden sandy color, about 6 to 7 minutes. Meanwhile, in a separate pan, heat the wine for about a minute then add the milk until it is just about to boil. Add the hot milk to the butter mixture 1 cup at a time, whisking continuously until very smooth. Bring to a boil. Cook 10 minutes, stirring constantly, then remove from heat. Season with salt and set aside until ready to use.

3. Concasse one tomato, small dice. Melt the butter in a medium pan, add Arborio and tomatoes, cover with the fat, and then add the wine. Add the stock in additions until smooth and creamy.

4. Boil 6 cups of water in a medium sauce pot. Add asparagus and boil until just done. Shock them in ice water bath and set aside until ready for use. Add them to a skillet with some olive oil, squeeze lemon juice on them and add salt and pepper to taste.

5. Remove chicken from oven, make sure the temperature reaches 165 degrees F and holds for 15 seconds. Plate it with the risotto and asparagus and garnish with some chopped basil and parsley if desired.