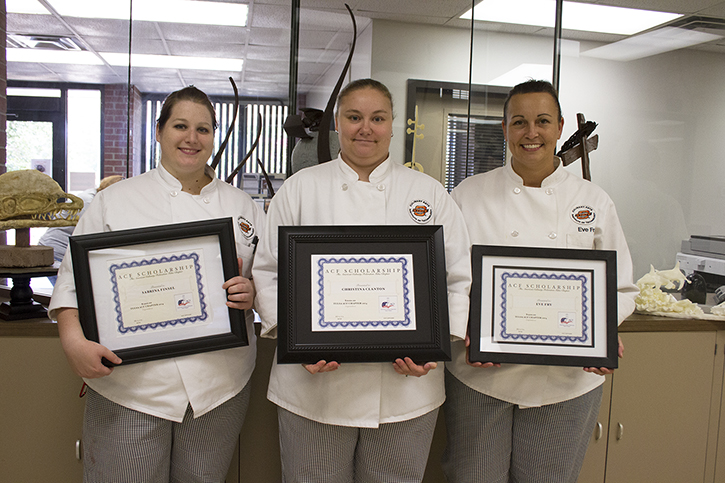 Three School of Culinary Arts students recently were awarded scholarships from the American Culinary Federation to help further their education.

The scholarship recipients have each had a own unique journey that led them to OSUIT’s Culinary program.

Sabrina Finsel said she always knew she wanted to be a chef.

“I picked OSUIT my freshman year of high school. This is the only school I applied to,” Finsel said.

And that eager drive hasn’t diminished, especially when it came to learning if she had been chosen to receive one of the scholarships.

“I checked my email at 2 o’clock in the morning,” Finsel said, and when she learned she had been awarded a $1,500 scholarship, she couldn’t wait to tell her family. “I texted my mom and she got mad because I woke her up. She said to let her know as soon as I found out.”

For Christina Clanton, her road to OSUIT wasn’t as direct. She originally enrolled at Tulsa Community College with the goal of eventually earning an education degree and teaching special education classes.

When TCC didn’t work out for Clanton, she decided to try turning one of her hobbies into her future career.

“I always liked cooking and watching the food shows,” she said. “When I found out there was a culinary school at OSUIT, I decided to apply.”

Getting a $2,000 scholarship means Clanton can continue her education and enroll in next semester’s courses.

“That’s the most I’ve ever been awarded,” she said.

The other $1,500 scholarship winner, Eve Fry, was just looking for a change after her husband died.

“I came here with my son for a tour. At the introduction I saw this video and I saw Chef Aaron Ware talking about this school and I said ‘That’s where I want to go,” Fry said.

For Fry, her scholarship is a weight off her shoulders.

“I pay two tuitions. My son is enrolled in the Natural Gas Compression program,” she said.

All three said the Culinary program is tougher than they thought it would be, but worth the work.

“There’s days where I think ‘I’ll quit,’ but then what kind of example would I set for my son?” Fry said. “It’s going to be worth it.”

Clanton said having classmates and instructors who keep her accountable has helped her stayed motivated.

“The instructors here want us to succeed and want us to do a great job,” she said. “I wouldn’t change it for anything.”