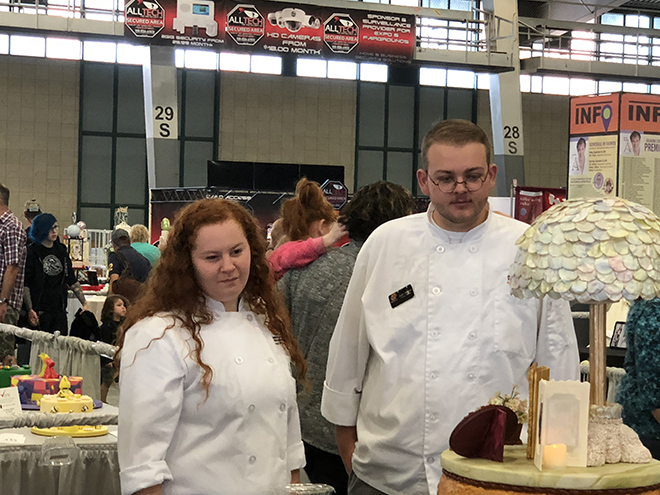 This was the 25th anniversary of the show, and it was announced Sunday by the show’s director Kerry Vincent that it was also its final year.

OSUIT Culinary students have been a mainstay at the Sugar Art Show with a group from the school volunteering for more than half of the show’s lifetime, said instructor Grady Perryman.

“We’ve been helping for 15 years. It’s sad. It’s become a tradition for us,” Perryman said. “Our students really enjoy volunteering and meeting the artists and seeing the cakes.”

This year the students volunteered at the show loading and unloading cakes, helping show organizers, monitoring and protecting the cakes and assisting with cake decorating demonstrations.

This was the second year Casey Newell volunteered at the Sugar Art Show.

“It was a lot of fun. It was a little stressful. We had a lot of stuff to do and there’s a lot of organization involved,” Newell said. “It’s exciting. It’s fun to be a part of this and meet so many chefs that you normally wouldn’t get to meet.”

Cameron Jones is in his first year in the Culinary program and was stunned by the cakes he saw on display.

It was a sentiment shared by Gage Simpson, who was also a first-time volunteer.

“It’s absolutely gorgeous. The amount of work is incredible. Some of the artists took a year planning and creating their cakes,” Simpson said.

Perryman, who took second place in the professional chocolate division, said volunteering at the Sugar Art Show meant hard work and long days for the students, but it was worth it.

“It was good networking for the students. They got to meet these cake artists. It’s the best sugar art in the world, some of the best craftsmanship in the world,” he said. “There’s always something you can learn. They might have seen something they thought they could never do.”

Perryman has volunteered as a tasting judge for a decade trying upwards of 30 cakes in one sitting.

“I won’t miss that part. I will miss seeing the people and seeing the cakes,” he said.