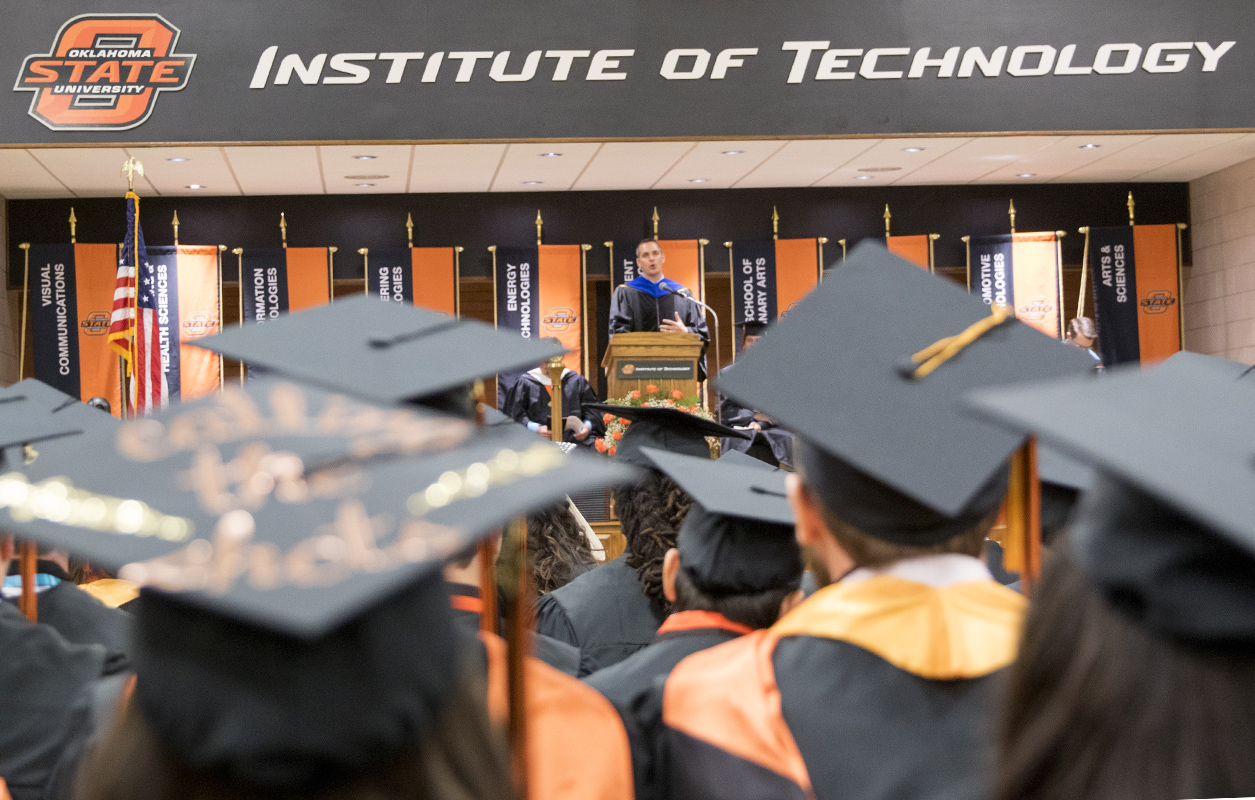 Despite the adage about success being all about showing up, commencement speaker Dr. Jerry Dawkins told the 206th graduating class from OSU Institute of Technology that it takes a lot more to prosper in the workforce.

“Woody Allen said it this way ‘Eighty percent of success is showing up.’ Woody didn’t mention anything about the other 20 percent,” Dawkins said, adding that he thought the math was a little off.

He also confessed to never being on that side of the graduation stage before.

“I have listened to several commencement speeches as a graduate, but I’ve never given one. So what was the first thing I did when they asked me to give this speech? I Googled it,” he said, and found a lot of similar themes such as follow your heart, do the right thing, be kind to each other or fight for what you believe in.

“All of those things are good advice, but I’m going to assume you already believe in doing the right things, and being kind to one another, and all that other stuff,” he said. “The one thing I found that was missing in most of the inspirational speeches was some concrete advice on how, exactly, to be successful in your life and career after college.”

Dawkins outlined four things the new graduates could do to ensure their careers were long and lucrative: show up early and stay late; don’t be afraid of failure; pay attention to details; and understand the value of hard work.

Working hard was also a theme in the address given by Jacob Allen, the student respondent and graduate of the Air Conditioning & Refrigeration program in the School of Construction Technologies.

Allen also began his remarks with a quote, this time from the band the Turnpike Troubadours and their song “Long Drive Home.”

“It fit this situation perfectly. It goes ‘If you want something, you will have to bleed a little for it, you will have to look it in the eye and you will have to call it out by name.’ I feel that is exactly what we have done here,” he said. “Each of us sitting in these seats have wanted this, it’s why we’re here. We have bled for this day in and day out, week after week, month after month.”

Allen also praised his instructors, especially those in the ACR program.

“These are phenomenal professors who have your back every single step of the way. If a student is willing to give the effort, they will not let you down. They will teach you everything they know,” he said, and that education goes beyond technical skills. “They teach you to be a good person, a good employee.”

Dawkins told those about to graduate that after they walk across the stage is when the real work begins, and there will be challenges they will have to overcome.

“You will face adversity in every aspect of life. At work, it may be a boss who’s tough to deal with, or co-workers who don’t pull their weight. It may be your own mistakes that you have to overcome,” he said.

“At the end of the day, it takes a commitment to hard work to achieve success. It does not come easy. As with anything in life, you get out of it what you put into it,” he said. “There will be a time you want to quit. You might have a good reason to, but don’t. Be stubborn. Be determined. Stay committed. And never, ever give up.”