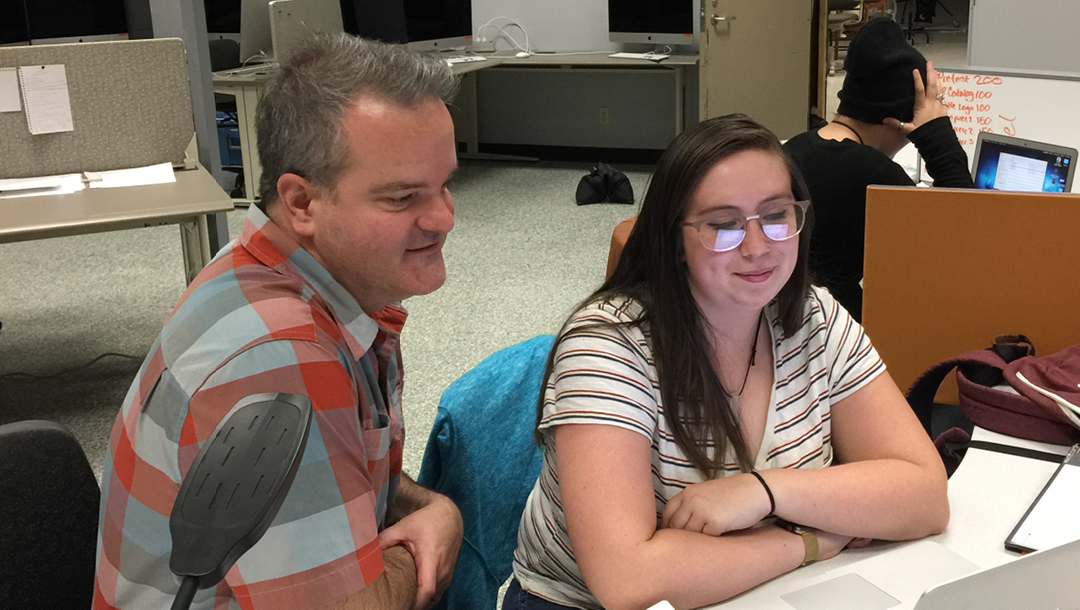 OSU Institute of Technology graduate, Jared Milam, returned to his alma mater to speak with Graphic Design Technology students about the prospect of their future in the industry.

Milam not only had the opportunity to speak and present work to a room full of students, he was also able to meet one-on-one with capstone students graduating in December to review their work and provide feedback, tips and advice.

“We routinely ask graduates to speak to our students to bring their real-world experience to the current student body,” said Mary Miller, Graphic Design faculty. “Graduates and other professionals are usually always happy to give their time to encourage students.”

Ashley Wilson, a first year Graphic Design student, said that she thinks it’s important to learn from those who have gone ahead of you.

“I didn't fully understand the amount of work that goes into different projects,” said Wilson. “I vaguely understood the process but after he went more in-depth on every step it became clear to me just how many little parts come together to make one final project.”

She said Milam encouraged the students to work hard, every step of the way.

“I learned that it takes time to work your way up in this career and also remain patient and diligent,” said Wilson. “He encouraged us to do our best no matter what, even if it isn't what we expected we’d be doing.”

Milam, who graduated from the OSUIT Graphic Design  in 1997, is now the executive creative director for Cinco Design in Portland, Oregon.

He had a few other positions before landing his position at Cinco Design, yet each stop provided lessons learned.

“The students learned a lot about how to manage your career and make the transition to another part of the country when you are busy working full time,” said Miller. “They learned about the structure of the companies Jared has worked for and the process by which work flows through the various departments, client organizations and the industry in general.”

Milam worked for Walsh Associates, now Walsh Branding, in Tulsa, Oklahoma before making the move to Portland to work for ID Branding.

“At ID Branding, I worked for a writer, not a designer, which made me frustrated at first,” he said. “It made me look at my design in a new way. Beyond the skill of graphic design, the stories that we tell and the ideas we bring to the table are the most important. It made me think about the story first.”

Milam’s goal was to be published in Communications Arts Magazine, and during his time at ID Branding, he was published three times.

Now at Cinco Design, his focus is dynamic media, where he has to focus on the content.

“The content drives everything,” he said. “You have to think about it in ways of integrated media. We’re designers, not decorators.”

Andy Moore, a first year Graphic Design student, said he learned about the value of being a “hybrid” designer.

“I was not aware of the value of being able to bring additional skills to the table such as illustration, 3D modeling, photography, etc.,” Moore said.

Through Milam's education at OSUIT, the small-town boy from Sallisaw has had the opportunity to work on many large brand names such as EA Sports, Nixon and Nike.