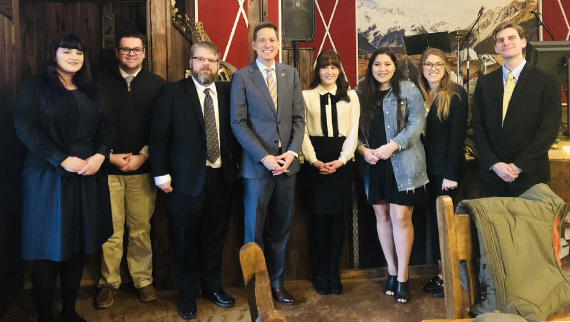 OSU Institute of Technology Graphic Design students have the opportunity of a lifetime to participate in a rebranding campaign for the city of Okemah, Oklahoma.

As part of the project, six students met with Lieutenant Governor Matt Pinnell, who was previewing and presenting the new branding concept for the State of Oklahoma at the monthly Chamber of Commerce meeting Jan. 28.

Caldwell’s Practicum class will be responsible for this rebrand. The class will design a complete rebrand of the city, including the city seal as well as creating Woody Guthrie historical signage. Three student teams will pitch branding concepts and a team of three will work on the historical sign.

This type of project allows the students to work with clients just as they would after graduation.

“After the initial meeting, I bring in the client to meet with my students and discuss the project with them,” he said. “After a client picks a design/concept, they will work directly with that student or group of students to make changes and corrections.”

Ashley Wilson, a student lead on the rebrand said this opportunity is helping benefit her future career by preparing her to work with clients.

“It feels wonderful to be a part of something so large as a student,” said Graphic Design student and team lead for the rebrand, Abby McNett. “Not many people can say they were part of rebranding an entire town, especially as a college student.”

The historical signage being created will be placed throughout the city to highlight significant places and events concerning Woody Guthrie while living in Okemah. There will be approximately 15-20 signs along with an overall map sign.

“The intent of these are to draw in more tourism for those interested in Wood Guthrie as well as tie-in with their music festival,” said Caldwell. “Another cool thing is that we will be working directly with the Woody Guthrie Center in Tulsa.”

OSUIT is not a new name to the city of Okemah. The Graphic Design program has done past work with Andy Tucker, Okemah’s economic development director, through an advertising class and was also familiar with the other Practicum class work throughout the years.

“This is a great service-learning project that shows that OSUIT and our programs want to partner with communities and give back,” he said. “These types of projects can help them grow as we rework their image so use it as a catalyst for change revitalization of their community.”