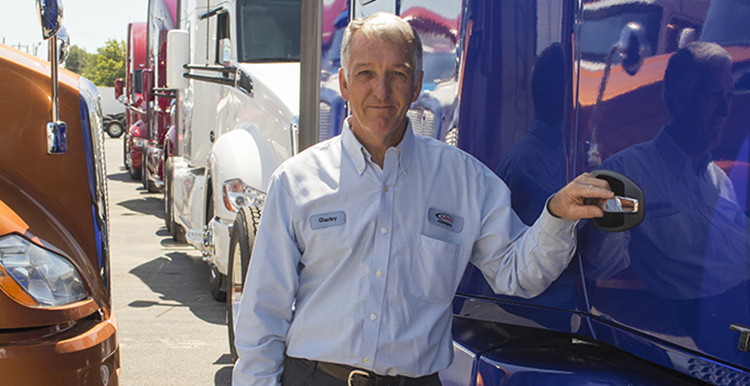 Growing up Charley Been had a vision of what he wanted to build his career and future around, but like many people, life seemed to have other plans.

“I went into the U.S. Air Force so I could then work at American Airlines, but I found out I was color blind,” so he had to adjust his dream.

“I met a guy who was a diesel mechanic and was making good money, so I came over to OSU Institute of Technology and toured the facility,” says Been, who graduated from the School of Diesel & Heavy Equipment in 1977.

After graduation, Been worked at Ryder Transportation where he started as a mechanic, then moved up to shop foreman and then service manager.

For the past 12 years, Been has worked at MHC Kenworth and now serves as shop foreman at the company’s Tulsa location.

During his decades in the industry, Been has also served as a teacher and mentor for many of those who have worked for him.

“Over the years I’ve had a lot of opportunities to train people, and it all stems from OSUIT. They taught us the basic knowledge of what you needed,” he says. “If you don’t know how it works, how are you going to fix it? It’s the same whether you’re working on computers, truck engines or hydraulic systems.”

That’s how Been got his start in mechanics when he was young— figuring out how things worked.

“I would mow yards and rake leaves. Someone would give me an old lawnmower, and I would have to fix it. I had some old cars, and I had to work on them to get them to run,” he says. “If you let me tear it down, I’ll figure out how to fix it.”

A lot has changed in the diesel and truck industry since Been graduated, and now he works to keep up with the ever-changing and advancing technology used in the vehicles.

“When I came up in the field, it was all mechanical. The only electrical things on a truck were the AM/FM radio and CB radio. It’s pretty amazing when you look at it now,” Been says. “The only way I’ve been able to keep up is we send people out to classes to learn and I learn from them.”

The future of his industry includes self-driving trucks with smaller and cleaner engines. But at its core, there is still that basic knowledge that technicians have to have in order to be a success.

Those same basics Been learned at OSUIT.

“The impact OSUIT had on my life, I wanted to help,” he says, so he’s given back to the university through serving on advisory boards and finding internship and full-time positions for OSUIT students and graduates.

To recognize his continued support of his alma mater, Been was one of eight alumni who were inducted into the OSUIT Alumni Hall of Fame in June.

“When you have people come and tell you you’ve impacted their life. You know, I just go to work and do my job to the best of my ability,” he says, so it was a surprise and an honor to learn he was being recognized. “I like to know that through my career I’ve been an inspiration to other people. You don’t realize the impact you have on people.”