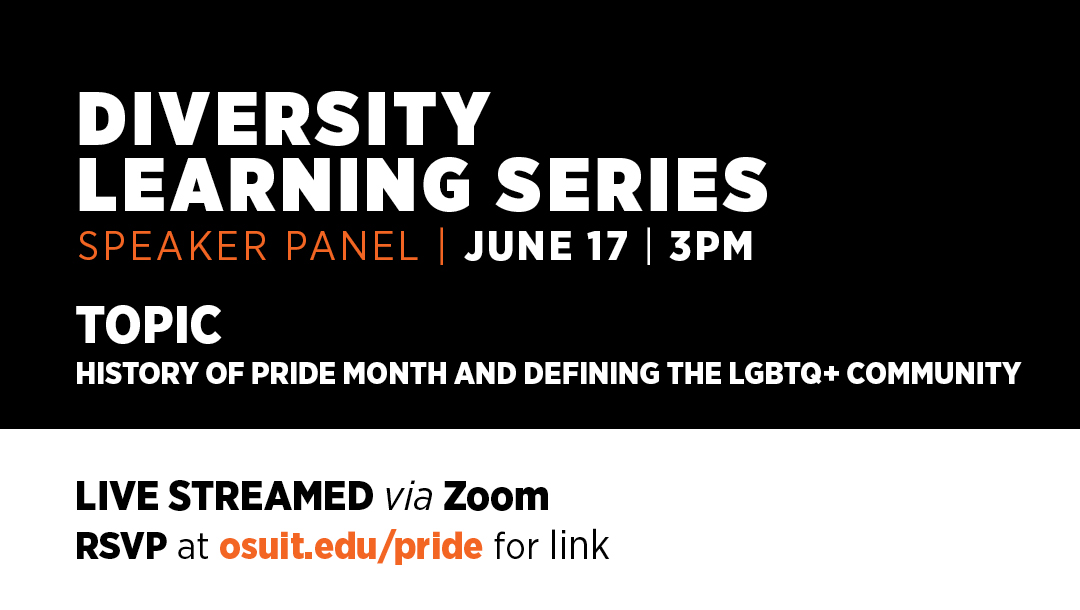 The next OSU Institute of Technology virtual Diversity Learning Series will be a panel discussion focused on the History of Pride Month and Defining the LGBTQ+ Community on June 17 at 3 p.m.

The OSUIT Diversity & Inclusion Committee is proud to welcome panelists Toby Jenkins and Alex Wade from Oklahomans for Equality (OkEq) based in Tulsa. Serving LGBT Oklahomans and their allies since 1980, OkEq is Oklahoma's oldest gay rights organization which works for social justice and full inclusion for Oklahoma's lesbian, gay, bisexual, and transgender (LGBT) citizens and their allies.

This is a free event available to all OSUIT students, faculty and staff.

Jenkins will cover the history of the movement, where they have been, and Wade will discuss the community's expansion, where they're going.

"The struggle for equality has been long, and the freedom of expression we have now wouldn't exist without our forebears," said Wade. "Combining the history of Pride and current LGBTQ+ culture makes for a perfect discussion. The acronym LGBTQ+ is ever-expanding, and it can be confusing at times. We will discuss the biggest things to consider when discussing LGBTQ+ identities and the changing definitions."

Jenkins has served as the CEO/executive director for OkEq for 12 years. Before that, he was board chair, pride director and long-time volunteer. He also served as a minister for 16 years and through the Tulsa County District Courts for 15 years.

"When I came out in the 90s, I ended a heterosexual marriage, faced unemployment working for elected officials, was rebuked by my church, ostracized by my family, a cancer diagnosis and alienated from my social circle," said Jenkins. "However, the worst challenge I faced was the Oklahoma legislators had introduced a bill to stop gay people from having custody of their children. The only thing I had left from my previous life was my children."

"They assured me they were fighting the bill and invited me to join their advocacy efforts," he said. "We stopped the bill from becoming law, and Oklahomans for Equality has had my allegiance and loyalty since then."

He says his children motivate him to stay the course and continue working to help Oklahoma become inclusive and welcoming for everyone.

Wade has served as the medical director for Oklahomans for Equality for over five years. In this position, he oversees the operation of the medical clinic and assists in transgender programming. He has a bachelor's degree in English and Gender Studies from the University of Tulsa. Wade has presented on LGBTQ+ issues to businesses, organizations and universities across Oklahoma.

He encourages attendees to bring questions for them to answer.

"This is a judgment-free zone, and we want people to leave with their questions answered," said Wade. "You don't know what you don't know. Attending sessions like these is a great way to understand topics that you are unfamiliar with."

For more information about the panelists or to RSVP, please visit the Diversity & Inclusion website page.