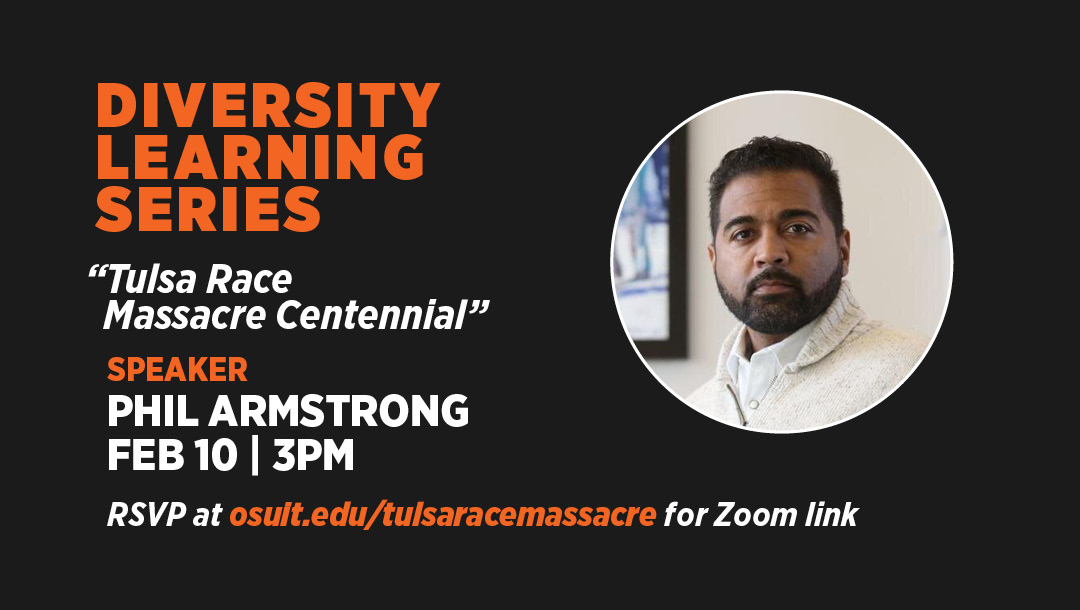 The 1921 Tulsa Race Massacre centennial is upon us and will be the topic of discussion during the next speaker event in the OSU Institute of Technology virtual Diversity Learning Series.

This is a free event available to all OSUIT students, faculty and staff.

Armstrong will be speaking about the 1921 Tulsa Race Massacre Centennial and discussing the Greenwood Rising museum's construction and design, a window into the Greenwood community and business hub that was destroyed in 1921.

"So often in discussions of racism, many people seem to have no idea how the past affects the present. Many think that the civil rights movement of the 1960s was a long time ago, that after everything Dr. Martin Luther King accomplished, everything was solved," said Dana Sterling, co-chair of the Diversity & Inclusion committee. "Nothing could be further from the truth. The impact of the massacre and destruction on North Tulsa is affecting its residents to this day."

He has a varied background in the corporate sector and as an entrepreneur in the restaurant business. Armstrong is actively engaged in the community by serving on several non-profit boards, including the Barthelmes School for Music, Community Service Council, Reading Partners of Tulsa, and the board for the Greenwood Cultural Center. He holds a bachelor's in mass communications from Central State University in Wilberforce, Ohio and a master's in public administration from the University of Akron.

The projects of the 1921 Tulsa Race Massacre Centennial Commission will educate Oklahomans and Americans about the race massacre and its impact on the state and nation; remember its victims and survivors; and create an environment conducive to fostering sustainable entrepreneurship and heritage tourism within the Greenwood District specifically, and North Tulsa generally.

"The Greenwood neighborhood and business district was deliberately destroyed. The people responsible who committed the arson, murders and looting, were never punished. No one was held responsible," said Sterling. "Some historians believe it was one of the worst outbreaks of racial violence since the Civil War."

The D&IC hopes this event will provide a meaningful history lesson of the horrific events of 1921 and provide insight on how to move forward and make changes.

"I believe it's good to not only mourn the destruction that took place but to present the facts about that community and what it accomplished," said Sterling. "The tale of rebuilding Greenwood after 1921 is a testament to the strength and determination of that community."

The committee is planning for the Diversity Learning Series to be a once-a-month event via Zoom. They anticipate the series will continue through the spring trimester, at some point resuming in-person events.

For more information about the speaker or to RSVP, please visit the Diversity & Inclusion website page.