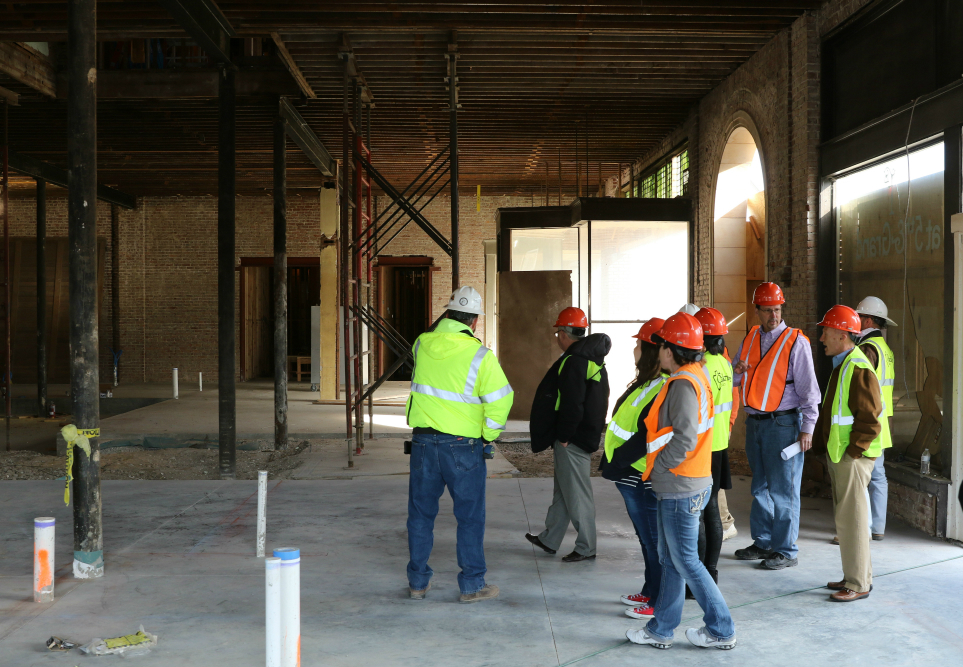 It’s been two years since the OSU A&M Board of Regents approved the purchase of two downtown Okmulgee properties to be renovated and turned into residence halls for OSU Institute of Technology students.

With demolition of certain areas within the two-building Grand Old Post Office complex at Grand Avenue and Fifth Street complete and interior construction underway, the vision of apartments and lofts is becoming more of a reality every day.

“The demo was extensive in this building. We’re asking the first floor to become something it wasn’t intended to be,” said OSUIT President Bill R. Path.

The two-building complex was originally Okmulgee’s post office along with other businesses and storefronts, many with different floor heights as the building matched the natural decline of the land, something that had to be addressed when turning the structure into living spaces.

“There’s a three-foot difference from the west side of the building to the east,” Path said, so architects and contractors had to pour new concrete to level some areas and add ramps to others.

There are also new lines and plumbing throughout the building, the ceilings will be covered in drywall to provide fire suppression between floors and all the entry doors into the apartment will be compliant with current fire codes, but will be designed to look like the building’s original doors. Safer staircases will also be constructed, including a new and improved grand staircase.

“We’ll have a new main staircase, but it will retain the original look and feel. We’ve saved the hand rails and the heavy moulding that will go back into the building,” he said.

A lot of consideration and care has gone into retaining as much of the historic 100-year-old building as possible. Barn and fire doors will be used as decoration; skylights will be repurposed as light fixtures as well as doors, doorknobs and fixtures.

“It will have a lot of character,” Path said. “What’s been pleasing to me is we’ve been able to take off plaster and will get to show off this 100-year-old brick.”

A lot is being done to introduce as much natural light into the building and apartments as well.

“We’re bumping up the roof and adding light wells to bring in natural light,” he said. “On the east side of the building there will be a two-story light well corridor and an exterior glass wall. Every apartment will have access to natural light.”

Right now, crews are doing electrical, plumbing and duct work and about 75 percent of the interior framing is complete, with the lumber coming from Okmulgee businesses, Path said.

“It’s been fascinating watching the workers, and the engineers have been wonderful,” he said. “It’s not your average building project. It’s taken the hard work of a lot of people. The architects, contractors and subcontractors have really done a remarkable job.”

The project is on pace to open in January 2018 and become the home away from home for 75 OSUIT students.

“It will do everything we hoped. It will quickly become the most popular student housing option we offer,” Path said.