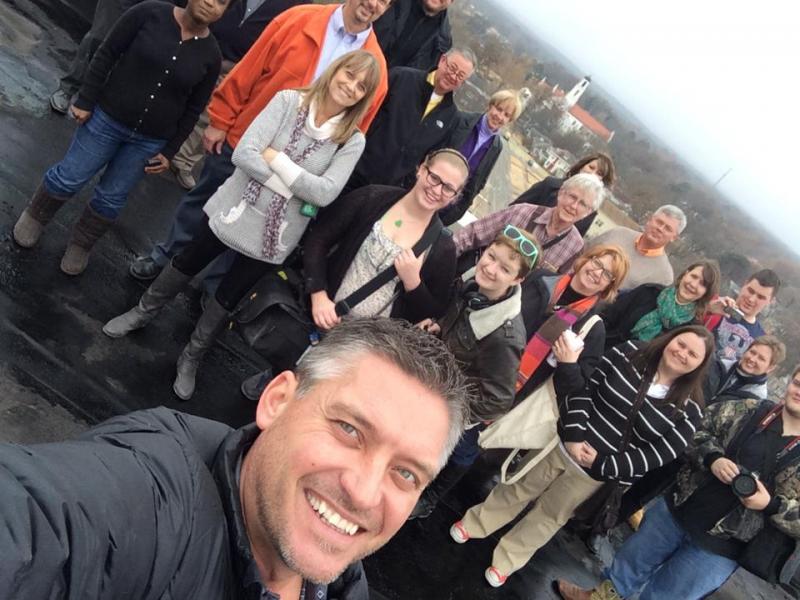 Ron Drake has a knack for bringing new life to historic structures that have lost their luster.

It started by accident in his adopted hometown of Siloam Springs, Ark., when he was a drywall contractor. Drake said he started buying old historic homes and renovating them. Then he focused on revitalizing entire neighborhoods and eventually the town’s historic downtown district.

He recounted his story in his book “Flip This Town: Preservation Made Practical on Main Street USA.”

Now Drake has gone from contractor to miracle worker helping small towns revitalize their downtown areas through his company Ron Drake Consulting, and he has his sights set on Okmulgee.

“What I found was a beautiful downtown, but a depressed community. A lot of people were discouraged because population numbers have decreased every year since the 1950s. It was one of the wealthiest communities in the 1920s, but its lost a lot of its luster,” Drake said, and when community pride goes, so does the community’s heart— the downtown. “It didn’t happen overnight, it’s a slow process. You get used to the plywood, you get used to the broken glass.”

Getting that community pride back is often times the biggest challenge.

“The hard part isn’t restoring buildings, its restoring minds and mindsets. Getting the community itself believing something great can happen,” he said. “That’s what the Okmulgee Rising project is all about, bringing back a thriving downtown to this community that desperately needs it.”

Drake said he wasn’t sure he could make much of a difference in Okmulgee until he met with OSU Institute of Technology President Bill R. Path.

The prospect of renovating historic buildings downtown and turning them into living spaces would not only be a step in revitalizing the Okmulgee community, but it would help meet the demand of student housing at OSUIT.

“There’s a cool factor to these buildings. I’m seeing all this opportunity,” Drake said. “If we can fuse this opportunity with the need for student housing, we could see 200 students living downtown.”

Leaders at OSUIT are so invested in the Okmulgee Rising project that they hired Drake as a consultant to visit and evaluate buildings downtown and make recommendations to the university about purchasing property to convert to student housing.

“Attitudes changed overnight. After that initial visit, I left Okmulgee so excited,” he said. “The best way to bring life downtown is to bring lives downtown.”

Currently there are over 10 buildings that have either been purchased, are under construction or are under contract for construction to be renovated into lofts or apartments, some very close to being open and ready for occupants, Drake said. It’s a monumental step forward when just four months ago, there was nothing happening.

“I think we’re going to start to see a change this spring and summer. A year from now in January 2016, there will be 100 new people living downtown,” he said.

OSUIT is a big player in the Okmulgee Rising downtown revitalization project, prompting other investors, civic groups and residents to get excited about the possibilities, Drake said.

“This is unprecedented. For a university to be one of the driving forces of a revitalization effort is unheard of,” he said.

And while it’s an exciting time for Okmulgee and Drake is thrilled to be in the middle of it, his new career as a revitalization consultant isn’t an easy one.

“This was a tremendous challenge. I see how hard it is complying with new fire codes, building codes and dealing with parking issues and permits,” he said, but it’s also tough on him and his family, who still live in Siloam Springs. “This was my next phase of life, and it’s a hard one. My daughters, the oldest is 21 and the youngest is 14. It’s tough missing things, but this is what I’m supposed to do and it feels good. I feel I can help small towns. I can make a difference.