Electrical Construction Student, Instructor in the Running to Compete Nationally

Electrical Construction Student, Instructor in the Running to Compete Nationally 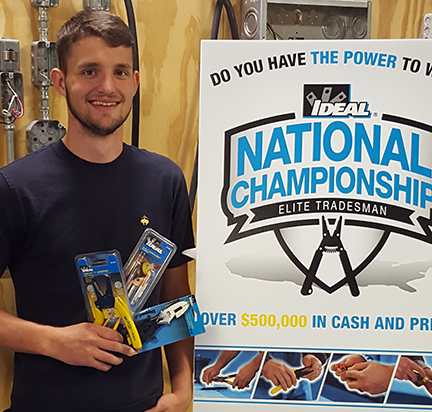 In August, OSU Institute of Technology’s Electrical Construction program hosted an IDEAL Elite Tradesman competition for students and professionals, including faculty, with the top times possibly advancing to the national championship in November.

Contestants had to cut four wire pieces, each eight inches long, then strip the ends of those wires, add wire connectors, bend and twist the ends to connect them to a light switch and then finally test for continuity.

It’s a lot to do for a timed contest, and so far, Oklahoma’s top student time — 48 seconds— and professional time— 53 seconds— were turned in at OSUIT.

Gavin McGee, who graduated Aug. 26 from the School of Construction Technologies’ Electrical Construction program, has the top time in the district, which includes Oklahoma and southern Missouri. His instructor Heath Mosco is leading in the professional division.

McGee said he learned about the competition a few weeks before it took place after seeing it at a trade show where IDEAL Industries had a booth. IDEAL makes electrical tools and equipment and sponsors the IDEAL National Championship every year.

“I’m super competitive. The whole competition aspect got me more involved and just wanting to beat my time,” he said, so he spent the two weeks prior to the contest practicing. “It’s more a personal goal than it is trying to beat anybody.”

But that’s exactly what he did. Fellow Electrical Construction graduate Levi Nelson had the second fastest time at OSUIT’s contest with 1 minute 6 seconds, and Jason Martin wasn’t far behind with 1 minute 14 seconds. All three won an IDEAL tool set.

“The toughest part is just getting quicker, trying to be fast. Speed is just repetition and taking out any unnecessary movements,” said Nelson, who knew exactly who was going to take the top spot, so he wasn’t too worried. “I was just trying to win some tools. It was more stressful for Gavin. He knew he had the time to beat.”

There are other small competitions scheduled in the Oklahoma/southern Missouri district through October 15, so nothing is certain for McGee and Mosco.

“We may get a chance to go to Disney and compete in the finals,” Mosco said. “It will be more complicated with not only speed, but knowledge also tested.”

Right now, McGee said it’s just a waiting game and a tough one since he knows he can go faster.

“I was upset with myself. In practice I was getting down to 38 seconds. I just got nervous when the time came,” he said.

But he credits Mosco with helping him practice and improve his time, and he hopes he did the same for his instructor.

“We were both pushing each other to go faster,” McGee said. “I enjoy it. It’s a competition so it’s fun.”

Tags
Electrical Construction
Back to Top
©