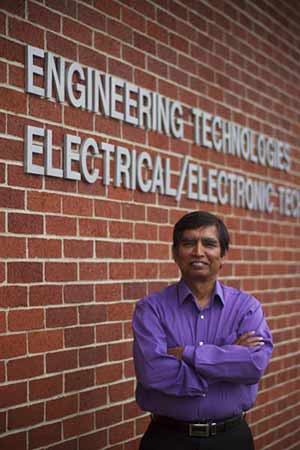 New Engineering Technologies Division Chair Dr. Abul Hasan can handle whatever weather Oklahoma can throw at him. He spent 19 years teaching at the South Dakota School of Mines and Technology, so he can handle the occasional blizzard and ice storm.

He also taught at universities in the United Arab Emirates and Kuwait for six years where temperatures can reach 120 degrees, so triple digit summers are nothing new.

“I can take the heat,” Hasan said with a smile that makes you wonder if he’s still talking about the weather.

Before he went into teaching and then administration, Hasan worked as an engineer internationally after graduating with a electrical engineering degree from Bangladesh University of Engineering and Technology in 1975.

“I like doing things with my hands. I was also good at math; it was my forte so to speak,” he said. “I was trying to decide whether to study math or engineering. If you’re an engineer you always have a job.”

Hasan worked as engineer in his home country, Bangladesh, for three years and then in Libya for three years before going to the University of North Dakota and earning a master’s degree in science in 1984. He continued on to the University of Wyoming and earned his doctorate in electrical engineering in 1988, which is when he first considered teaching.

“My brother is a chemical engineer and a faculty member. I asked him how he could teach the same thing over and over. He said you may be teaching the same subject, but it’s never the same thing,” Hasan said.

The field of engineering is constantly changing and evolving so he never gets bored.

Hasan and his wife have two children, a son and daughter, and both are pursuing advanced degrees in science fields. His mother still lives in Bangladesh.

Following in the footsteps of longtime Engineering Technologies Division Chair Dolph Hayden, who served OSU Institute of Technology for 28 years, can’t be easy.

“Settling down anyplace is difficult,” he said but added that he felt like he belonged at OSUIT while interviewing for the position. “Everyone was so nice, so friendly. They made me feel a part of the campus before I even accepted the job.”

After spending six years in the Middle East, Hasan said he and his wife felt it was time to come back to the United States and were looking for someplace special.

“I like to visit big cities, but to live in a big city is different. I was looking for a smaller place, and this position came up,” he said. “I like the sincerity and niceness of the people. I think I had been missing that in the Middle East.”

Hasan said he sees a lot of potential in the Engineering Technologies division and hopes he can work to recruit faculty and more students, step up marketing of the programs, and use his overseas connections to increase the number of international students.

“Change is in the wind,” he said. “I think I can make a difference in the lives of the students and in the college.”