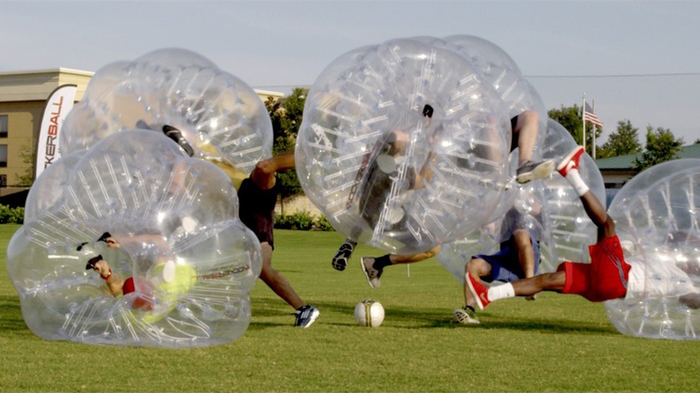 The Office of Student Life, along with the Student Government Association (SGA) and other student clubs, are offering several free events and activities for the OSU Institute of Technology campus during SpringFest, April 3 through 7.

It’s also a chance for businesses and organizations to get a better feel for OSUIT students.

“The businesses see and meet students and get a better idea of our demographics,” Rash said. “They have the chance to say ‘This is what we have, and this is how we can benefit you.’”

On Tuesday, April 4, SGA will offer a pop culture Trivia Night in the Student Union from 6 to 8 p.m.

Wednesday, April 5, students can try their hand, or feet rather, at Knockerball. It’s a game where players wear a large inflatable ball around their torso while also running and trying to score goals with their legs and feet.

“It’s part bumper cars and part soccer,” Rash said. “This is the activity I might be the most excited about. I’m going to want to play, but just coming and watching will be a fun event.”

On Thursday, April 6, students, faculty and staff can enjoy a free movie at the Orpheum Theatre, 210 W. 7th St., at 7 p.m., they just need to bring their OSUIT IDs.

And the entire campus community is invited back downtown on Friday, April 7, for OrangeFest.

The event kicks off at 4 p.m. with student clubs sponsoring different booths and activities. Future Chefs Association will offer orange smoothies. The Horology Club is doing watchmaking demos. OSUIT’s chapter of the American Society of Civil Engineering will sponsor the virtual reality simulation tent. And the International Society of Automation will be selling glow-in-the-dark merchandise for the Glo Run 5K downtown and at the starting line at the Okmulgee YMCA.

SGA is also sponsoring the concert by local band Unsung Alibi, which starts at 5 p.m., as well as the Meet & Greet tent following the concert.

Rash said she wants to grow SpringFest and have students be just as involved as they are during Welcome Week in the fall.

“SpringFest is a way to say thank you to the students for choosing OSUIT, and for all their hard work and all the studying they’ve put in during the year,” she said. “We wanted to say ‘Here’s a week of fun things to do.’”