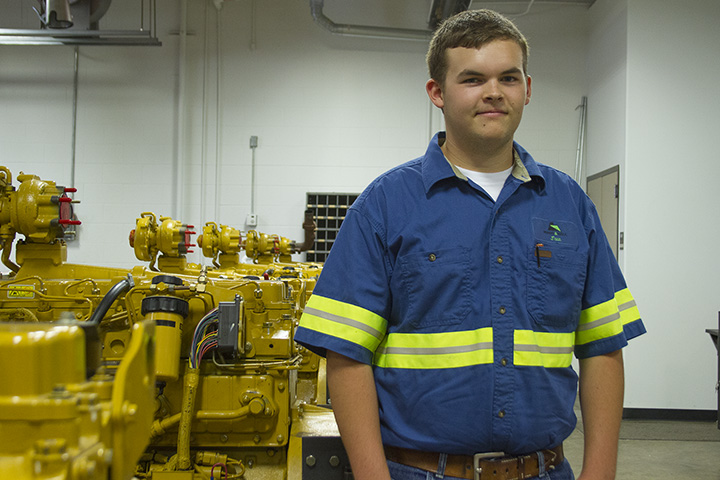 Since he was young, Jace Ewing liked to fix things that were broken.

“I always had an idea I wanted to be a mechanic,” said Ewing, a student in the Western Equipment Dealers Association program in the School of Diesel & Heavy Equipment.

Although he originally thought his tinkering skills would be put to use on automobiles and not farm and industrial equipment, he wasn’t a stranger to the larger machines.

“I’ve been around farm equipment my whole life,” said Ewing, who grew up in Waldron, Ark.

A family friend who works at Hugg & Hall Equipment Co. in Fort Smith, Ark., suggested Ewing check out OSU Institute of Technology and the WEDA program. He was hired at Hugg & Hall in summer 2016 and started at OSUIT that fall.

“I really like it; I’m learning a lot. The instructors are good,” he said.

Even though Ewing is sponsored by a dealership, there are still costs to his education, which is why when he learned about a scholarship from the Oklahoma Association of Community Colleges, he decided to apply and was awarded the $1,000 tuition waiver.

“I was pretty happy about it. I didn’t expect it. This is the first scholarship I’ve ever gotten,” he said. “It’s helpful, even with my dealership sponsorship. I have to pay for my schooling, and then the company reimburses me.”

Tony Redington, an instructor in the WEDA program, said Ewing can always be counted on to contribute and be productive in class as well as help his fellow students.

“Jace is the type of student every teacher wants in their classroom and every employer wants to hire. He wants to succeed and is willing to provide the time needed to help those around him succeed,” Redington said.

Ewing was recognized in March in Oklahoma City at the State Capitol along with other OACC President’s Tuition Waiver recipients.

“They took us into the House Chamber, and we got to sit in the seats. It was really nice,” he said.

Ewing is scheduled to graduate in August 2018 and is looking forward to his internship at Hugg & Hall this summer.

“I’m looking forward to being able to do more things with what I’ve learned here,” he said. “I feel more comfortable working on the equipment.”