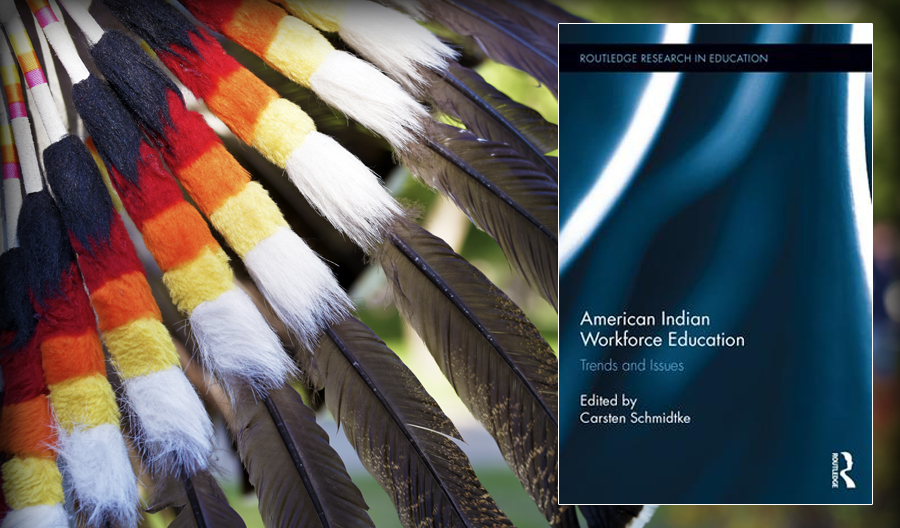 Carsten Schmidtke, an assistant professor at the University of Arkansas’ College of Education and Health Professions, is a former OSU Institute of Technology instructor who taught on the Okmulgee campus for 14 years.

In 2008, he left OSUIT to join the faculty at UA, but his time at OSUIT inspired him to study the relationship between Native American students and workforce education, which became the subject of his doctoral dissertation.

Building on his dissertation, Schmidtke edited a collection of essays titled, “American Indian Workforce Education: Trends and Issues,” about the current state of workforce education for Native Americans. Routledge Research in Education recently published the book that is aimed at graduate students and other scholars in the Native American studies field.

“Being at OSUIT changed my life. Over the years, just through my classes and teaching, I’ve seen the nexus between technology training and education,” he said. “I fondly remember my time at OSUIT, and it was hard to leave. There was a congeniality and camaraderie there. It was a great place to work.”

When he decided to study Native American culture and workforce education, Schmidtke found almost no research on current issues, so he used OSUIT as a case study.

“OSUIT is so unique in its Native American population. I found out that the graduation rate of American Indian students at OSUIT over an eight-year period was 34 percent. Now that may not sound too impressive until you learn the national graduation rate is 6 percent,” Schmidtke said. “OSUIT has to be doing something right that they are graduating students at this rate.”

He also found no complaints of discrimination from Native American students who participated in his study.

“That’s something to be proud of,” he said.

Schmidtke wrote the introduction and conclusion of the book as well as the chapter on career development counseling for American Indian students in which he reviews techniques professionals can use that provide culturally sensitive advice to students deciding on a career path.

“Prejudice is still strong against workforce education,” he said. “When it comes to minorities, there is an attitude that schools and universities want to ‘track’ students into workforce training programs to push and keep them down.”

This ongoing distrust of government and public schools among some American Indian tribes and communities is deeply rooted in the history of government policies as they relate to Native American education, he said.

In his research, Schmidtke found Native American students are the most successful in learning environments where they can first observe, then engage in private practice before finally performing in front of others.

“Traditional Native American learning styles appear to be a good fit for technical education pedagogy,” he said. “A tribal community can’t just be made up of members with advanced professional degrees. It also needs skilled workers— plumbers, mechanics, engineers.”

Schmidtke hopes to build on the research he’s started and work with administrators and faculty at OSUIT again to continue to study the topic of American Indian students and workforce education.

“My study was just the beginning. Now we need follow up studies, we need to dig deeper,” he said, “To investigate how we can further improve student retention and success.”