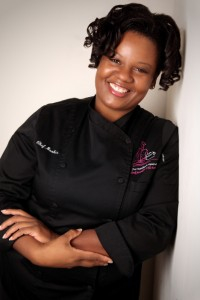 Published by Tulsa World | Chef Jennifer Hill Booker grew up in Mississippi, where she acquired her love of making fresh, Southern food. But she honed her culinary skills in Oklahoma.

And Booker returns here this week for signings of her new cookbook and an event at Oklahoma State University Institute of Technology, where she received an associate degree in applied science-culinary arts after attending the University of Tulsa.

Booker, a former culinary instructor and a culinary arts program director, is now the executive chef and owner of Your Resident Gourmet LLC, a personal chef and catering company.

Her book “Field Peas to Foie Gras: Southern Recipes with a French Accent” reflects how she built a culinary foundation on her Mississippi roots and showcases her unique take on contemporary Southern cooking.

“I have always loved food. I grew up in a family of farmers in the Mississippi Delta, growing a garden and raising livestock and cooking. There was always lots of love and lots of laughter,” Booker said by phone from her home in Atlanta.

Booker’s family moved to Tulsa when she was a teenager, and she attended her senior year at Booker T. Washington High School.

Living here gave her more diversity in her cooking.

“One great thing I learned in Oklahoma was southwestern cooking, which is something I was not familiar with,” Booker said.

And in school she gained a love of classical French cooking.

She lived in Oklahoma eight years and moved to Germany with her husband, a military officer. She continued her culinary education at Le Cordon Bleu-Paris.

“My book truly pays homage to my legacy of my family farm and everything I learned there,” Booker said. “From there I married the two cuisines that I loved to cook because French and Southern cooking is very similar. Southern cuisine can be very elegant.”

In addition to recipes, Booker shares personal stories and photos of her family — raising chickens, butchering hogs and tending the garden. The easy-to-follow recipes, food-pairing suggestions and delectable photographs make this a must-have cookbook for any kitchen.

It is surreal coming back to Tulsa, Booker said, and she plans to see her former home and high school and visit friends.

Booker’s parents were a bit leery when she told them that she wanted to be a chef.

“That is not at all what they wanted for me,” Booker said. “But I told them that is what I wanted to go to school and do.”

She also had a message for young people who are considering going to school.

“Technical schools can be a wonderful foundation for a career, any career, and they can start off there and spend less money,” Booker said. “You can get a top-notch career, and there are excellent instructors.”

Here’s a recipe and excerpt from Booker’s cookbook.

Similar to baked soufflé, this dish is whipped up light and fluffy and baked in a hot oven to trap the air in the egg mixture. What makes it special is that you can add different fillings, such as bacon, ham, onions or cheese. Roll it up, slice it and it still stays light and fluffy. Baking it in a jellyroll pan makes it easier to roll, and precooking the raw ingredients ensures that the omelet is cooked through.

1. Preheat the oven to 375 degrees. Line the bottom of a jellyroll pan, or deep sheet pan, with parchment paper, and grease with 2 tablespoons butter. Set aside.

2. In a large bowl, beat the cream cheese, flour, salt, pepper and milk until smooth. Stir in the beaten eggs.

3. Heat the melted butter in a large stainless-steel sauté pan over medium heat. Add the bell peppers and onion and cook for 10 minutes, or until translucent, being careful not to brown. Remove from the heat and allow the vegetables to cool in the pan.

4. Add the onions and peppers to the bowl with the egg mixture, and stir until well-combined. Pour into the prepared jellyroll pan and bake for 30 to 35 minutes, or until the eggs have puffed up and are set in the center. Remove from the oven and immediately spread the mustard on top of the egg, and sprinkle with 1 cup cheese. Top with bacon and and an additional 1 cup cheese.

5. Roll the baked egg lengthwise, peeling the parchment paper away as you go. Return the rolled omelet to the pan, sprinkle the top with the remaining cheese, and bake an additional 3 to 4 minutes, until the cheese is melted. Remove from the oven and allow the egg roll to rest for 5 minutes. Cut into 2-inch slices and garnish with the diced tomatoes and chopped green onions.