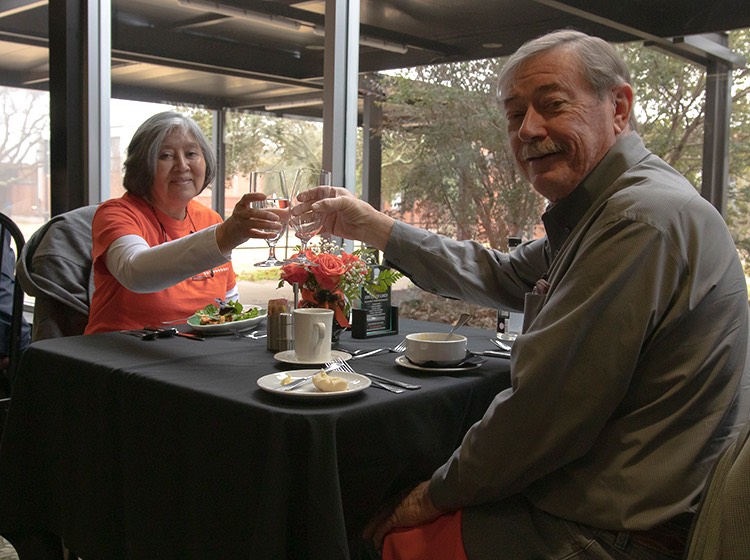 Although many things have changed on the OSU Institute of Technology campus over the past 45 years, the love of two alumni has only grown.

Larry and Mary (Jackson) Davis took a trip down memory lane during a recent visit to campus. They had only revisited campus once since graduating in 1973 and 1974 and were excited to see what all was different. The couple remembered the campus being much smaller in 1974 and rightfully so—the OSUIT campus has grown and evolved over the past 45 years.

“A lot has changed. I can’t believe we used to walk that far to the Dairy Queen for dates,” she said.” “Everything seems so much larger and more spread out than before.”

The couple met while attending the university, fell in love and got married before graduating.

Larry, originally from Perryville, Missouri, had worked in a bakery in high school and served as cook in the army. After the military, he found himself on his way to the OSUIT campus to pursue a degree in Culinary Arts. On the drive to Oklahoma, something changed, and Larry decided to change his degree to Construction.

Mary from Keota, Oklahoma, wasn’t sure of her future after high school in a small town. After talking to the Choctaw Nation, she learned about the Clerk Typist degree offered at the time and decided to attend in hopes of having a better job after college.

Without many activities on campus in the 70s for Larry to occupy his time and Mary’s Psi Delta Chi sorority pledge stunts, they both found themselves outside of Twin Towers, Mary’s dormitory, where the childcare center sits now.

Larry was pitching pennies with a few friends he had made on campus when Mary caught his eye. He offered her a go at playing the game, and the rest is history. The two began to spend a lot of time together.

“I found out that a cheeseburger and a Dr. Pepper was the way to her heart,” he said.

Between coursework and dates, Larry built up the courage to propose to Mary at the local Pizza Hut, a regular date spot for the couple. Mary, who had every intention of going back to Keota or Stigler after graduation decided that Larry must have been sent to her for a reason and accepted his proposal.

They were married on Aug. 11, 1973, at Brookside Baptist Church in Tulsa with a small congregation of 11 people and a cake especially made for them from the Culinary Arts bakery.

“It was in August when we got married; we had to transport the cake from here in the back of my car all the way to Tulsa,” he laughed. “It shifted on us a little bit, so we had to readjust it when we got to the reception.”

Mary graduated in 1973 and had already begun working when they got married.

“The training I received from OSU helped me gain a job with Skelly Oil Company in Tulsa upon graduation,” she said. “I had the interview on campus and was offered the job!”

Larry graduated the January following their wedding. He had received a recommendation from OSUIT for the name of a local remodeling contractor, Vickery Remodeling, but due to the cold weather, work was postponed. Davis, now a married man, needed a job.

Through an OSUIT connection, he found a contact at Southern Mill Co. and took a job as a draftsman, a trade he had been prepared for due to his program of study. A few months later he was offered a job with the remodeling contractor and worked for him for 10 years before eventually starting his own remodeling construction business, which he continues to do today.

Larry and Mary have two daughters, Cynthia and Melissa, and five beautiful grandchildren, one of which is looking at OSU for college. The couple enjoys traveling and has visited many places including Germany, Hawaii, Alaska, Maine, Grand Canyon, Yellow Stone, the Smoky Mountains and Niagara Falls.

Their whole lives were shaped by those two years at OSUIT. Not only did they leave with degrees that led to careers, they took a love that has lasted 45 years and counting.